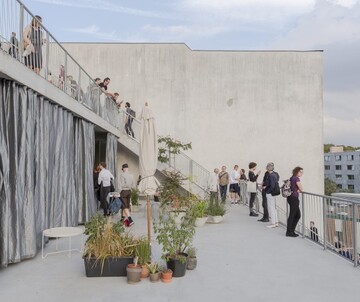 Every two years, the exhibition "Europe's Best Buildings" focuses on outstanding architectural projects from Europe and has thus become a magnet for the public. It honours projects whose visionary character serves as an orientation, if not a manifesto for the development of contemporary architecture.

This year’s award goes to a pioneering housing development project: the transformation of three apartment blocks from the 1960s in Bordeaux with a total of 530 units, by Lacaton & Vassal in collaboration with Frédéric Druot and Christophe Hutin. The other finalists’ projects range from a public square in Tirana, Albania, to new combinations of living and working in Berlin. The Emerging Architect Prize was awarded to BAST for the extension of a village school in Montbrun-Bocage, France. From the almost 400 projects nominated from 36 European nations, a total of 40 projects were selected for the exhibition by the distinguished jury, of which the Az W Director Angelika Fitz was a member. These include three projects from Austria: the state school in Seestadt aspern by Fasch&Fuchs and a housing development by Vlay Streeruwitz in Vienna-Floridsdorf as well as the Haus der Musik by Erich Strolz and Dietrich Untertrifaller in Innsbruck.

An exhibition by the Fundació Mies van der Rohe – Barcelona