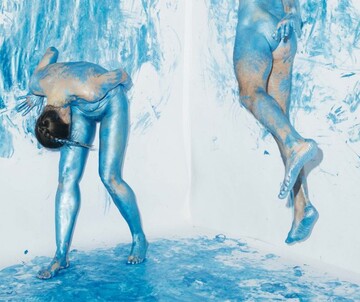 „A contemporary manifesto for an entertaining, insatiable, and colourful body.“ — Libération

ENDO is an exciting and invigorating take on the history of performance art. It draws inspiration from Yves Klein’s imprints of bodies as well as from the works of anti-conformist artists like the writer, photographer and filmmaker Shuji Terayama and the members of the legendary Gutai group. The meaning of the title recalls – somewhat ironically – the artistic-theoretic movement called Endotism, whose followers turned away from dominant conceptual art forms and vehemently criticised all forms of exotism in the 1960s and 1970s. The “exotic”, they proclaimed, should lose its prominent position in the arts in favour of introspection. David Wampach places his own body in the energetic centre of his performance. The body functions simultaneously as material, medium, instrument, actor and spectator. According to Wampach’s utopian approach, we can access the archaic origins of dance and the arts only through the body.