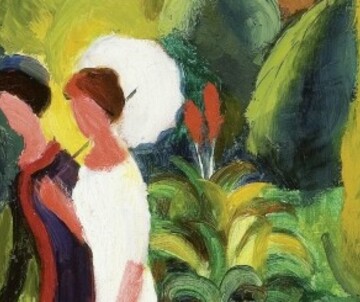 At the beginning of the 20th century, emotion became a stylistic device; to observe meant to feel. Driven by instinct and in opposition to academic canons, young rebels from the Dresden artist community “Die Brücke” brought landscapes of the soul onto the canvas. In revolt against industrialized society and its conventions, they also sought a nature-based reformation of life. Meanwhile, the circle of editors responsible for the Munich almanac “Der Blaue Reiter” [The Blue Rider] went in search of a new inwardness in art, which allowed for the purely intuitive as much as for cultivated reason. At the same time, the concept of beauty was being questioned and expanded. Colors played a decisive role in this process, acting as the main vehicle of an image’s dramaturgy. These works of German Expressionism have lost none of their suggestive effect to this day.

With this exhibition curated by Ivan Ristić, the Leopold Museum is presenting some 120 exhibits from the Swiss Braglia Collection and the German Johenning Collection for the first time in Vienna, among them works by Emil Nolde, Max Pechstein, Ernst Ludwig Kirchner, Erich Heckel, Wassily Kandinsky, Alexej von Jawlensky, Marianne von Werefkin, August Macke and Franz Marc, as well as Paula Modersohn-Becker, Paul Klee and Lionel Feininger.