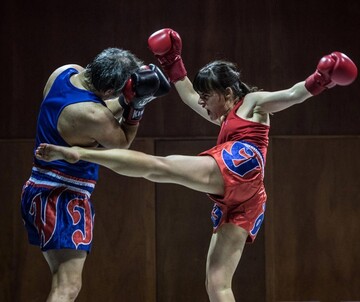 A boxing match as a bold plea to face the future without fear. Portuguese choreographer Cláudia Dias steps into the ring with Spanish poet Pablo Fidalgo Lareo. She fights with fists, he with words. In twelve rounds they negotiate the global economic crisis. As part of a society that has been knocked out several times before, they will not only spill blood, sweat and tears when they throw arguments at each other, getting ever closer in the process. While Cláudia Dias and her sparring partner, Thai kickboxing coach Jaime Neves, gear up and hit each other with red boxing gloves, a referee recites Pablo Fidalgo Lareo’s texts. Can the fighting spirit of boxing serve as an example for art? The author’s topical subjects – restrictive monetary policy, migration, depression, and unemployment in the EU – are dealt like uppercuts. For the first instalment of the seven-part performance series SEVEN YEARS SEVEN PIECES Cláudia Dias has trained as a professional boxer – now she is always ready for the next blow.