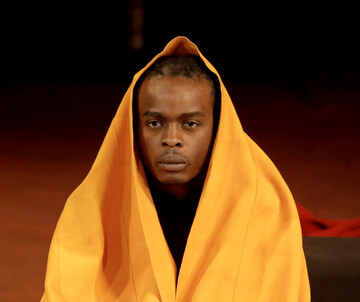 Thirty years after his legendary 9-hour version of the Mahabharata, Peter Brook returns to this Indian folk epic, creating a breathtaking distillate of this ancient Sanskrit text. What this enormous collection of stories and religious and philosophical parables means is best summed up with a sentence from the first Parva (book) of the Mahabharata: "What is found here can be found elsewhere. What cannot be found here cannot be found anywhere else.“ Battlefield shows the apocalyptic aftermath of the war between the rival royal families of the Pandavas and Kauravas. In face of millions of deaths on the battlefield, King Yudishtira, the blood of the massacre staining his hands, can only perceive his victory as a defeat. With the help of his mother Kunti and the blind king Dhritarashtra, an opponent who lost his 100 sons, he desperately tries to find out how he can find inner peace despite his guilt.

In Battlefield, dead seriousness and playful ease blend. Accompanied by the beating of the drum, the four performers become winners and defeated, worms and eagles, victims and perpetrators, transforming silk scarves into rivers and corpses.

Peter Brook, born in London in 1925, is one of the most famous directors in the world. With his productions and texts, he has played a major role in the theatre in the last decades. For Brook and his longtime associate, Marie-Hélène Estienne, it is the questions of responsibility, guilt and forgiveness in a time of conflicts and wars that make Battlefield a parable for the present. These questions are primarily addressed to Trump, Putin, Erdogan and Assad, but also to all the other presidents of the world.