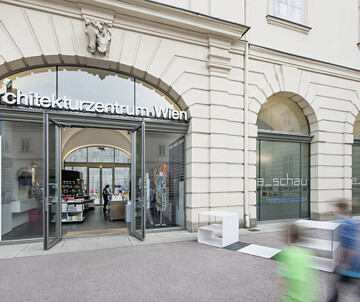 Oswald Haerdtl
Collection with a View #1

Using the new concept of a display window facing onto the courtyard, the Az W directs attention to its unique collection.

In terms of the history of architecture this display window deserves our attention. The advances made by industrialization allowed large glass panes to be produced that soon became a field in which architects liked to experiment. The displays behind them were codes for the modern big city that opened up a perspective of the future for the viewers and at the same time served to train their taste.

To mark the start of the new series “Collection with a View” we turn to a pioneer of the shop and display window – the architect and designer Oswald Haerdtl (1899–1959) – and make the motif of the presentation itself into the theme. Together with the “grafisches Büro” the particular appeal of Haerdtl’s design of entrances and products is examined.

His Espresso Arabia on Kohlmarkt, which has disappeared from the public face of the city, was a masterpiece in cosmopolitan interpretation of Vienna’s café house culture. The way the colour scheme and curvy design are combined with modern sophisticated elements is exemplary of the spirit of the 1950s. Haerdtl’s Arabia is one the highlights of an unmistakable Viennese corporate design which opened wide into urban space.

Parallel to the display window n the permanent exhibition the theme will be examined in-depth, using original drawings.