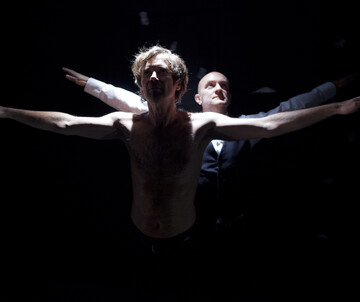 “When Iztok Kovač toured Europe with his solo How I Caught a Falcon, Judith Mackrell of The Independent argued that ‘new dance is one of the last things anyone connects with Slovenia right now, and Kovač demands an instant regard by simply coming from where he does’. At that time, the solo was above all a form of artistic emancipation for Kovač . . . Falcon! opens a new space for ideas, wondering, excitement and artistic pleasure that did not exist before. It seems that this new space welcomes a fruitful encouragement towards interpretation and reflection – today perhaps even more so than at the time of the creation of the original performance.” (Jela Krečič: Delo, 18 October 2013)

Choreographer Iztok Kovač, and director, theatre theoretician and performer Janez Janša, now, in their fifties, return to the cult solo performance by Kovač How I Caught a Falcon from 1991 – one of the performances of the new Slovenian contemporary dance that made it possible to integrate it into the European context. After this performance Kovač founded the EN-KNAP dance company and production organisation and developed his own choreographic and dance language.

It is impossible to step into the same river twice, and they don’t even try to. The original solo is just a frame for their contemporary ideas about art and ageing, and a basis for their honest testimony about human limits. Falcon! is a never-ending struggle for perfection, for the effort to keep on moving and never stop.