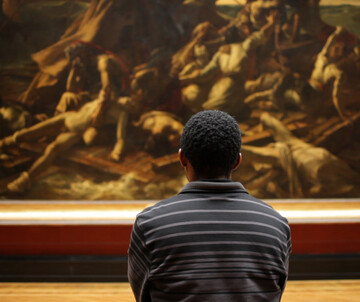 Marcel Odenbach, one of the most important contemporary video artists, based in Germany, has overwritten his first solo exhibition at Kunsthalle Wien with the title of a poem by Ingeborg Bachmann. Beweis zu nichts (Proof of Nothing) thematizes the persistence of the victim-perpetrator structure within post war German society.

Marcel Odenbach’s films also stress, that the topic of the dealing with the past is not only a European one when he shows international trouble spots and the reconciliation of populations by armed conflicts and genocide:

Im Kreise drehen (Turning in circles), for example, is a film, that deals with the memorial at the site of the former concentration camp Majdanek. Currently he is working on a new film about the Buchenwald memorial, while the video installation In stillen Teichen lauern Krokodile (Crocodiles lurk in tranquil pools), deals with the 1994 genocide in Rwanda.

In the intensive study of the problem of dealing with the past Odenbach works reverberation of Nazism reflected into the present. The artist observes various cultures and political constellations, letting them influence his work. Reflections on the familiar and the foreign, his own biography and the biographies of others, are also important motifs in his work, which puts forth its arguments in a way that is as aesthetic as it is political.

Marcel Odenbach, *1953 in Cologne, lives and works in Cologne and Berlin.