On Saturday during VIENNA ART WEEK 2017, artist and cultural theorist Gerald Straub gave a guided visit of the Q21 Artist-in-Residence Studios. The current Artists-in-Residence presented their recent projects and showed their approach to arts and technology – from artistic practices that combine economics, design and media arts with philosophy of computation (Laura Lotti) to slowing down the process of publishing (Megan Francis Sullivan) to examining the human body as an electrochemical computer (Bill Seaman).

Sillyconductor‘s proposed project is a sound-based research on church organs in Vienna and also alternative means of recording the audible/inaudible sounds they produce.
For a sound artist and recordist, the organ is what the whale is for the marine biologist – a tremendously vast subject of research. Being basically the only instrument that you can actually be in and study from the inside out, it offers the perfect scenario for exploring every detail of its anatomy. His interest is following the path of the sound, from the moment the organists’ hand touches the key till the moment the sound comes out. The intricate mechanical labyrinth of the organ is a concert in itself that the audience seldom hears. The air, the valves, the motors, the electromagnetic circuits, the pedals, the louvers, the cables, they all play along with the resulting sound. Sometimes, there is no music, only sound. He would like to employ the entire arsenal of recording devices in a non-intrusive manner so that while the organ is playing, he can capture the “negative” recording of the organ – all the sounds with the least amount of familiar pipe sounds. He has already tested this technique at the Lutheran Cathedral of Saint Mary in Sibiu for the Metaorganum project (a research project and a public multimedia installation he did earlier this year: www.facebook/metaorganum). From this point of view, Vienna is a goldmine with its more than 20 church organs, some of which are used nearly every day. He also plans to use the gathered material for a radio show for Kunstradio and also a performance in Vienna on November 23 at frei_raum Q21 exhibition space.

Željka Blakšić presented a series of collages/prints from one work currently in progress called “The third way”.
Her multidisciplinary project originated from her research-intensive practice and her passion for collecting of objects, texts and archival footage from Eastern Europe, more specifically Yugoslavia, the country she was born in that ceased to exist in the early 90s. The project is realized through two critical enquiries: The first examining archival material of the magazine START and the second looking to the contemporary spatial implications of architecture purchased under Yugoslavian regime in the heart of the West.

She also showed her video: “Clearing Agent” which examines the book Burlington (Iowa) “Once upon the time” by Dan Bield and delves into the slide collection and a publication purchased from eBay.

Cristina David gave a presentation of her project Hic Habito for the exhibition “Stopover – Ways of Temporary Exchange” at frei_raum Q21 exhibition space. She wishes to question the way in which artworks are highly protected, judiciously taken care of, and given lots of valuable space, whereas artists often face precarious financial circumstances and poor living conditions.

Laura Lotti presented her own research and practice within the start-up ecosystem, and in particular the distributed collective she is collaborating with (ECSA), regarding the interplay between p2p technologies, cryptoeconomics, and perspectivism, using finance as raw material and crypto as medium to inflect market structures and invent new social-economic forms. So it is a real business, but also a self-reflexive artwork (inspired by Ian Bogost’s suggestion that startups are conceptual art).

We think that the relationship between art and economy, or art and politics, cannot be about content: art expressing views of social resistance or art making things more sellable is simply not relevant. We think that the common ground of art and politics and art and economy is today in the collapse of old forms of society and subjectivity … and in the creation of new forms, this is where they meet.

Sophia Cacciola & Michael J. Epstein displayed clips and trailers of recent film works including:
The Women of Rock Oral History Project, a collection of digital interviews documenting the lives and careers of women in rock whose work and careers have been underrepresented or omitted from rock journalism and historical scholarship. Typically, women’s representation in popular culture is defined and explained from a dominant male perspective.

Blood of the Tribades is a modern, sociopolitical feature-film take on 70s Italian, German, and Spanish arthouse and British lesbian vampire movies.
Magnetic is a cerebral sci-fi film exploring consciousness and existentialism at the end of the world.
Thirteen was commissioned for a Friday the 13th music and film program at The Museum of Fine Arts, Boston, USA. The film provides a glimpse at the creatures vying for your unconscious mind while you sleep.
Do Not Forsake Me Oh My Darling – Episode 17 : Fall Out is the final installment in a music and video series of works inspired by The Prisoner. The 1960s British spy-fi television series was a major influence on modern-era genre film and television. Its utopian, sleepy setting, The Village, a gilded panopticon dystopia run by faceless, nameless, and nationless forces, forecast much of our modern techno-social tension. Episode 17 is a sparse, music-video tribute to the final episode of the series in which a Kafkaesque chaos results in systemic collapse.
Some works are on display for virtual visit at: http://launchover.com/launch/artweek2017/
Sophia Cacciola & Michael J. Epstein are also developing a robot for monochrom’s ROBOEXOTICA Festival.

Robert Perišić presented his recent novel “No-Signal Area” (“Područje bez signala” in Croatian, published 2015., 424 pages).
The novel “No-Signal Area” is set in the post-war period in two not-named Balkans countries, connected in the plot about rebuilding the factory which is closed due to the collapse of socialism and destruction during the war. The story involves a wide spectrum of characters with different social and political backgrounds, starting from the working class to the financial elite. Through numerous personal stories, Perišić is trying to highlight and articulate the social changes and their impact on people’s lives, including their privacy, in the last thirty years.
The project he is currently working on is the novel “Autumn Language Course” which follows multiple, very different characters, all foreigners, who meet each other in an unnamed European city. The introductory part of the novel predominantly deals with the experience of being foreign and speaking and interacting in a foreign language. Aside from its negative consequences, the position of being foreign and speaking in a foreign language opens up spaces for exploration to the characters, with a setting of anonymity and a new social contextualization.
This novel will touch on questions of language and freedom, the experience of existing in a foreign language and world.
He  also presented his previous novel “Our Man in Iraq” in German translation  (“Unser Mann vor Ort“, Graz 2011)

Bill Seaman gave a talk about his conceptual artwork entitled the Insight Engine – It is a transdisciplinary search engine. He will also speak about Insight World, a virtual environment where differing media elements can be brought into proximity based on searches from inside the system, and by bots on the internet.
His exhibition An Engine of Many Senses (2013/2017) at SCHAURAUM Angewandte will open on November 30.

Chris Sims invited by eSeL:
For the zamspielen Vienna Art Week Special Edition, Chris Sims will be running a game that, like most roleplaying games, is as much improv theater as a game: on Sunday, an “event” occurs at the CERN Hadron Collider. This event causes a cascading collapse of the multiverse onto Earth. The occupants of the area are similarly collapsed into amalgams of their selves in various reality streams. Beings that exist only in separate realities also manifest. Most are or become monstrous, but some become more heroic. Everyone changes. The players in Raum D are of the heroic variety. The audience might be called on to add chaos to the situation.
Characters will be created on the spot with a random selection of two archetypes, which the player then combines to make his or her new self. For example, you might draw telekinetic and tentacled. You could decide you transform into a fully sentient, terrestrial, psychic octopus that flies using telekinesis. The main goal for the new heroes will be to escape the MuseumsQuartier, which has become a Gallery of Terror. They’ll be exploring various (imaginary) parts of the area to acquire what they need.

During the Studio Visit, Chris Sims’ short presentation will involve explaining what he is doing as a professional and what he is planning to do at the game “, as well as allowing people to test out the start of the game by creating their own alternative personas. He will have archetypes ready for random selection, as well as samples of what the players will do and find as they explore the altered quarter. It’s possible that he will have others there who can demo the game, but he would rather involve the tour guests. He will most of the time will be spent creating and musing about those creations and their interaction with the story about to unfold.

S*I*G – open mic
Visitors were invited to select and read an excerpt from one of the publications, including ‘Irrational Man’ by Francesca Lacatana, ‘A Nice Well-behaved Fucked-Up Person’ by Jill Johnston, ‘Spring Equinox’ by Inka Meißner, ’50 Schilling’ by Ulla Rossek, or from the symposium reader of ‘Unangenehme Gefühle’, organized in 2016 with Sonja Cvitkovic and co-published with Bierke Verlag.
S*I*G (short for ‘special interest group’) is a series of singular essays published periodically since 2016. Each edition is created individually with a specific artist or writer. The format of 14 x 21 cm remains constant, and results from the overlap of A4 and US Letter size paper, making it easy to publish in any country. The design of each issue is made in collaboration with designer Sara De Bondt. The edition size is kept small, distributed primarily through personal exchange, readings, and subscription.

Karen is developing Strange Radio Episode 6, currently titled Haus – Covenant of the Tongue. This episode is part 1 of a sonic diptych about her family’s home on Novaragasse in the 2nd district in Vienna, said to be haunted. The sound piece weaves in vocal and meditation exercises from the Kabbalah, the Jewish mystical tradition. Thanks to TONSPUR curator Georg Weckwerth, Haus – Covenant of the Tongue will be a three-month sound installation in the MQ TONSPUR_passage opening December 3, 2017. 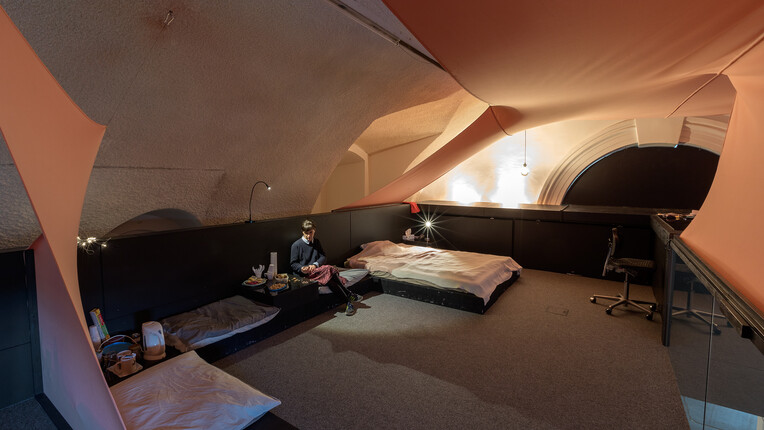