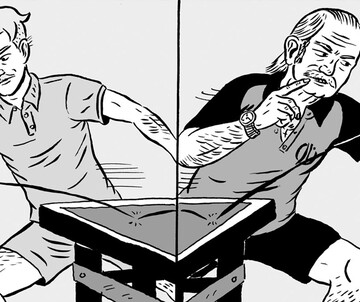 In this episode of the comic series "Herta & Hüne", two table tennis icons and their student Viny end up in a residential park. The traditional club TTC-Alterlaa has its headquarters in this satellite town. The trio “HuH” wants to challenge them to a match. But can they find the right entrance?

Vinz Schwarzbauer, born in Graz in 1987, lives and works as a comic artist and illustrator in Vienna. He studied at the Academy of Fine Arts Vienna in the class for graphics and printmaking techniques, where he founded the magazine "Franz the lonely Austrionaut" with other artists. His comics until now are self published or as part of anthologies. As an illustrator Vinz has worked for the Falter, Standard, Burgtheater, Residenztheater, Salzwelten Salzburg or Jacobin Magazine.