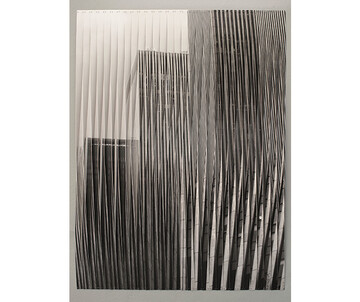 Korrektur der Gegenbewegung (Correction of Countermovement) deals with the spatial perception of the big city in motion. Impressions of the fragmentary and fleeting emerge, as they are familiar from transit situations. The view from a moving car through grid structures transforms the passing facades into rushing disturbing images. In passing, the view of blinds behind reflecting shop windows evokes images of urban flickering. The graphic structure of the Novotel in Vienna, shot on camera from a train, is translated into rhythmic architectural fragments. Repetitive sequences that evoke vibrating and pulsating patterns and overwhelm the eye are reminiscent of visual means of Op-Art. The spatial understanding of the specifically urban is characterized by the notion of flow and acceleration. Through the twisting of the stripes the flatness of the photographic medium is broken up and translated into a spatial and at the same time cinematic structure.
At the EIKON Schauraum, Sinta Werner has developed a site-specific work that responds to the special situation of the showcase-like exhibition space. Through the passage, the work is perceived as it passes by: The changing viewpoint activates the three-dimensional photographic work and makes it appear as a moving image. The movement of the spectator alongside the image responds to the strolling of the passer-by in the urban space and interprets the aggregate state of the city as flow and acceleration.

Sinta Werner was Q21-Artist in Residence at the MuseumsQuartier Wien in March 2020 and August 2022. A main feature in the latest issue EIKON #119 is dedicated to the artist.
Sinta Werner (b. 1977 in Hattingen, Germany) studied at weissensee school of art and design and UDK in Berlin, at Hunter College, New York, and at Goldsmiths College, London. She lives and works in Berlin.