Picturing Nature: A Spotlight on the SpallArt Collection

Picturing Nature: A Spotlight on the SpallArt Collection 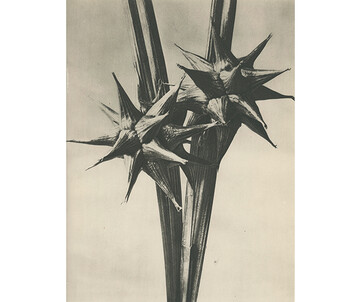 Depictions of landscape and nature have been inextricably linked to the medium of photography since its inception—from Joseph Nicéphore Niépce’s Blick aus dem Arbeitszimmer (View from the Study) to Anna Atkins’ British Algae: Cyanotype Impressions and Karl Blossfeldt’s Urformen der Kunst (Archetypes of Art). Used both for scientific documentation purposes and in the visual arts as a means of artistic expression, the ambiguity of photography becomes particularly evident in the genre of nature representation.
Andra Spallart has been collecting photographs and video works since the 1980s, and her SpallArt Collection now includes over 2,500 works, ranging from historical objects to international icons to recent discoveries. The focus of the collection is on contemporary, photographic positions from Austria, which is set in relation to classics of American and European photographic art as well as to more recent works from the European environment. The themes of nature and scientific documentation form a major focus of SpallArt.
On the occasion of FOTO WIEN, EIKON takes a look at the collection and makes selected treasures, most of them safely stored in the depot, now accessible to a larger audience. For “Picturing Nature. A Spotlight on the SpallArt Collection,” works by contemporary artists such as Elfriede Mejchar and Edgar Lissel are juxtaposed with classics, including Karl Blossfeldt, demonstrating the broad spectrum in which a photographic exploration of the fragile as well as vital relationship between humans and nature can take place.

Biographies of the participating artists: