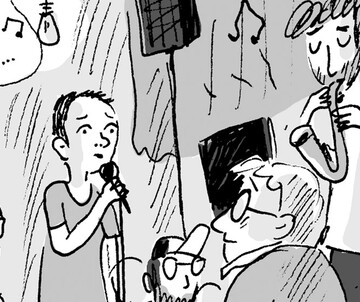 When the depression artist says: "Sorry, I somehow don't know how to stop ...", you are already in the middle of a performance ("Psychosis / unplugged") at an art college. With a lively drawing line and a fine nose for interpersonal vibrations Kati Rickenbach describes her role as a guest critic with a touch of irony.

Kati Rickenbach, born in Basel in 1980, lives and works in Zurich. She is a cartoonist, author, live drawing performer and co-editor of the comic magazine STRAPAZIN. Numerous publications, including the Züriversum comic strips in the Zürcher Tagesanzeiger, the two autobiographical graphic novels "Filmriss" 2007 and "Jetzt kommt später" 2011 and, most recently, a Corona comics series curated by the Cartoon Museum Basel.