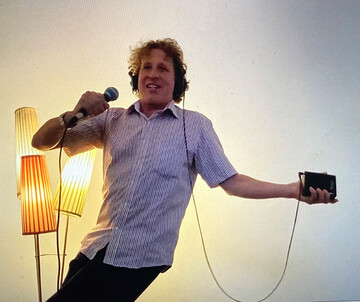 This will be the opening of visual artist David Moises’ artistic statement at Performance Passage. und so weiter und so weiter und so weiter is the title of Moises’ visual score, which represents a take on more or less well-known lyrics that can be followed word for word across the light boxes – always one dance step ahead of the letters. On the opening night, the visual score will be accompanied by a special performance by David Moises. And to fend off the cold, we will offer a selection of drinks in seven different colours.

Performance Passage. Space for Poetics of the In-between is a curatorial project by Andrea Maurer. The specially designed displays showcase two different visual compositions each year. Highlighting experiments with language, artists from all genres get invited to take part. The spatial design of Performance Passage is by Christoph Meier. Each artistic position is accompanied by a publication, which can be purchased from the on-site vending machine.

David Moises, born 1973 in Innsbruck, lives and works in Vienna. He studied at the University of Art and Industrial Design in Linz and at the Humboldt University in Berlin. His work is characterised by its high experiential factor. His kinetic objects and furniture mostly have mechanical functions that testify to a satirised and satirising enthusiasm for engineering. They join the cadence of machine art of Futurism, Dada and Fluxus. Moises thus masters the complexity of things and the reification of complexity. Form, function and content are always in a special but good relationship to each other in his works.