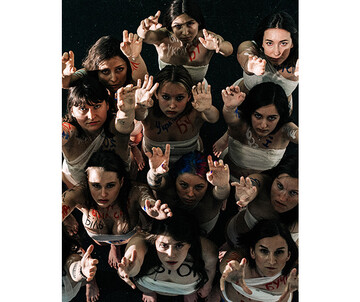 An exhibition in cooperation with Freiraum Ukraine.

Since the Russian Federation’s invasion of Ukraine on February 24, 2022, more and more cases of rape committed by Russian soldiers have been recorded in the country—on social media, in the press and in NGO reports. Anastasiia Yakovenko dedicates her exhibition to this aspect of the current war, while exploring the questions of who is allowed to speak about sexual attacks, what remains unsaid and how the victims can deal with these crimes. Shaped by the performing arts, she uses the photographic medium as an instrument to translate difficult narratives into artistic images. In her imagery, Yakovenko refers to the feminist group FEMEN, but shows the visual protest of a new generation.
The title of the exhibition “Vanja was here” (Russian “Тут был Ваня”) is borrowed from an inscription at Liechtenstein Castle in Maria Enzersdorf. The building was located in the Soviet zone during the occupation of Austria from 1945 to 1955, when Russian soldiers scribbled “Petya/ Vasya/ Vanja was here” on the doors of the castle. Vanja—one of the most common male first names in Russia—is now synonymous with the perpetrators. With “Vanja was here”, Yakovenko not only wants to draw the attention of the European public to these war crimes, but also to motivate the victims to seek psychological help and support.
As part of the exhibition, it is possible to donate to the charitable organisations MASHA Foundation (mashafund.org.ua) to support victims of sexual violence in Ukraine.

Anastasiia Yakovenko (b.1998 in Poltava, Ukraine) worked at the Theatre of Modern Dialogue (Ukrainian “Театр Сучасного Діалогу”) from 2015 to 2021 in Poltava, where she realized many projects in the fields of discrimination, migration and corruption as well as the annexation of Crimea. In 2021 she discovered photography as an artistic expression for herself. Anastasiia Yakovenko currently studies communication science in Vienna.