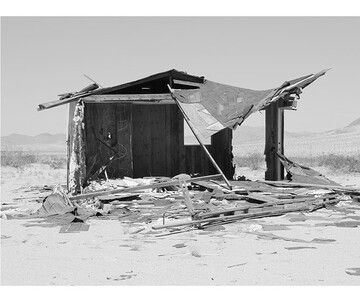 Alfredo Barsuglia installs a small house with a red gabled roof made up of pieces from old demolished houses. Weathered wood, windows, a gutter, a chimney pipe, lamps, etc. are the materials that he recycles and stages as a house module like in a museum display in the public space of the MQ Wien. On the one hand, the setting is reminiscent of a »forgotten place« that invites to go on a voyage of discovery and to explore the charm of transience, the forbidden and the hidden, on the other hand it refers to a museum exhibit and its preservation in a glass display case as well as to a theater scenery. Through the numerous details, props and inconsistencies, he invites the viewer to find their own associations. Past, present and future are condensed in this recycled building that tells multiple stories between reality and fiction through materials and objects. The last house seems to have survived the last human.

From 1999 to 2003 Alfredo Barsuglia (*1980 in Graz) studied painting and graphics at the University of Applied Arts in Vienna, at the Academy of Fine Arts in Vienna and at the Art Academy in Kraków. His works address artistically and socio-politically relevant contexts in a wide variety of media and formats such as installation, sculpture, painting and performance. Accordingly, his work is presented both in a museum context and in public space, deliberately blurring the line between the real and the fictional.
Alfredo Barsuglia lives and works in Vienna.

Thanks to: Simon Reitmann and University of Applied Arts Vienna / Wood Technology Department