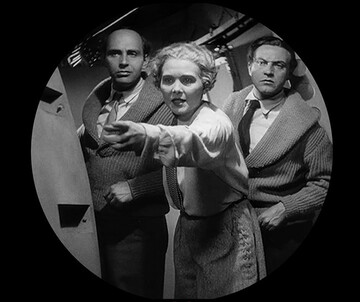 For his 1929 science fiction film “Woman in the Moon,” Fritz Lang invented the countdown for rocket launches that is still used in actual space missions to this day. The found footage film loop “Once the day will come” is made up entirely of scenes from this film involving gestures of pointing. On the one hand, the protagonists' fingers become the hands of an analog clock, running backwards and counting down to a start that never happens. On the other they point to possibilities of interpretation aside from the visible image, outside of our imagination, and beyond time and space.
(Karin Fisslthaler)