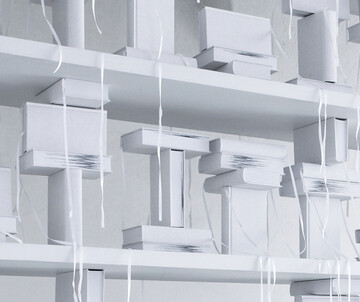 From a mathematical point of view, a white book could represent the sum of the contents of all books. Here, emptiness does not stand for nothingness but for everything. From acoustics we are familiar with the phenomenon of superimposed frequencies that result in static or white noise.
In the installation for the MQ ART BOX, books sit and lie on a bookshelf with a hand drawn frequency curve on the edges. The design of the bookshelf adheres to the proportions of the golden ratio. The ratio between the shelves and the areas filled with books corresponds exactly to the ratio of an opened double page. Conceptually compacted, the shelves represent the grid of rows and the books represent speaking or “language” itself.
Temporarily placed in the middle of the MQ, white noise is reminiscent of the Leseturm (reading tower) that was originally planned for this location but never realised.

*The library was originally developed as a commission piece for the contemporary art museum Stift Admont, but has never been shown
in the form presented here.

Claudia Märzendorfer (* 1969 in Vienna) studied sculpture, which she views as a poetic concept of form. She sees the world as material and works with film as sculpture, photography, drawing, sound and text. Her works pursue a conceptual rigour and are often executed in simple black and white. To this end, the artist
works with analogue techniques, archives, site-specific installations and temporary sculptures, often connected to acoustics.
Her work has recently been shown in the following solo exhibitions: 2019 Hellerau Dresden, Garage Kunsthaus Vienna, OK Linz; 2018 Festival Wien Modern, Singuhr Projekte Berlin; 2017 KM- Halle für Medien Graz; 2016 MSU Maribor, and numerous group exhibitions.
2017 Gmoser Award by the Wiener Secession, 2014 BMKOES Outstanding Artist Award.
Claudia Märzendorfer lives in Vienna and works at the Praterateliers studios.