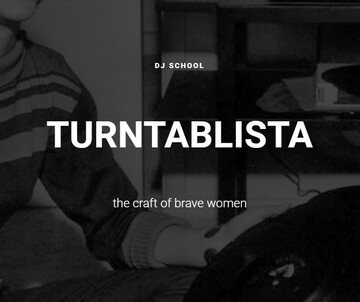 Turntablista is the first private DJ school in Austria founded by a woman with the purpose of creating a strong female role model for aspiring musicians.

Masha Dabelka will introduce you to the art of DJing in her free workshop.

About the founder
The musician Masha Dabelka began early musical education at the age of four at the music school in Novosibirsk. After numerous cultural activities in Russia in 2008, she continues her professional and student career in Vienna, Austria. There she produces electronic music from ambient to techno, experimental and drone - for film music, sound installations and other art projects.
She studied at the Academy of Fine Arts Vienna, where she passed her diploma with honors. After she started her doctoral studies in philosophy. As a DJ, live performer, sound artist, she performs at various international festivals: Electric Spring 2016, ''Elevate Festival''2013, ''Wiener Festwochen'' 2009, ''Moving Closer - Innovative music and art festival'' in Warsaw 2009, ''Viennale'' 2007, ''Radius'' in Salzburg 2006, as well as in different countries and cities: Estonia, Czech Republic, Germany, Italy, Belarus, Russia: Moscow, St. Petersburg, Novosibirsk, Tomsk, Irkutsk and etc..
In addition to the artistic activity, she also gives workshops in the field of electronic music for pupils and students. Between 2009 and 2015, Masha Dabelka worked as an assistant in the sound studio of the Academy of Fine Arts Vienna, where she got to know the latest technology in music production. Through numerous collaborations with visual and media artists, and thanks to her international background, she has developed her special artistic taste. Masha Dabelka's productions are poetic and subtle, taking her listeners on a journey into the past and into the future.
In 2017 she released her first solo album on vinyl.