Michael Koch: The Virtue of Disorientation

Michael Koch: The Virtue of Disorientation 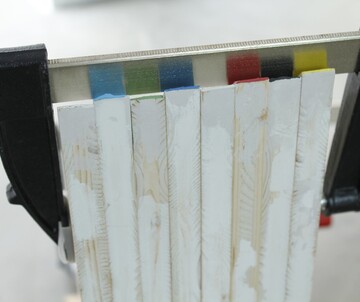 Jan Arnold ist proud to present the artwork of Michael Koch - this is a exclusive one week exhibition!

Michael Koch oscillates between painting, sculpture, new media and music, he loves electronic music which influences his pictorial work. According to Walter Benjamin, not only the movement of the eyes belongs to looking, but also their decommissioning. Decommissioning the view is one of the topics Michael Koch is focussing in his fine art projects. He tries to visualize and translate music into colors and forms, as in his exhibition co-operation with Karl Salzmann.

Visualization of the sound sculpture by Michael Koch generates itself in the intervals between the feedback and the diverging radius of the circular microphone, for example, which is picked up by Michael Koch and translated into concentric circles and geometric characters. This results in a picture of the sound, which represents the tempo, the rotation and the pauses between the notes. Like in Michael Kochs paintings the most important thing is the gap between the elements of his mural reliefs, like in James Blake´s song Limit to your love. Michael Koch is a contemporary fine artist and DJ and he is interested in visualization of sound and the silent in between.

Elisions, like in Heinrich Heine's Poems, are characteristic for the paintings as well as for the wall reliefs. Dashes, blank lines, space characters, absolute silence are part of that dysfunctional space. The tongue of expression is lanced by a net of cavities. The demonstrative gaps are a statement. The possibility of
subtile interpretation opens a new range of perception. He is checking every position of his deeper impact to fulfilling the perfect line.
Denise Parizek, 2017

Michael Koch is a contemporary fine artist and DJ and he is interested in visualization of sound and the silent in between.