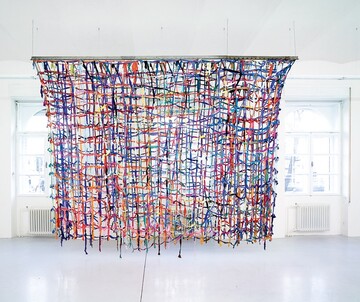 equally spaced nets are arranged in such a way so as to make the space seem impenetrable while, at the same time, allowing for clear glimpses depending on the viewer’s position. due to the geometrically arranged levels of textile, the empty volume becomes visible in which rhythmically strung groups of colours form patterns.
the perspective of perception creates the three-dimensionality of the space, and textile straps lend a haptic component through their hanging characteristics.