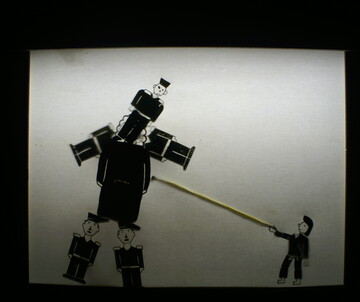 In 2010, the members of the Hungarian artist collective Gruppo Tökmag came across a comic-book diary depicting the life of Sárkány Lee (Dragon Lee) in the Hungarian city of Pécs in the 1980s. In this unique story, the everyday experiences of a Roma teenager are mixed with fantastic episodes.

Inspired by the story, Gruppo Tökmag present their interpretation in the form of a multidisciplinary performance, which combines different storytelling formats. The shadow theatre piece is based on the diary; the figures in the play are made of bicycle parts and animated by young actors. The main character, Dragon Lee – whose depiction draws on action films and comic-book heroes – has a kind of superpower. He can fight the policemen who continuously abuse their power over loitering, unemployed young people (which was a crime at that time in Hungary). Other elements of the performance, a documentary film, memorialise István Kolompár. He was the author of the comic-book diary and grew up between his family home and state custody. He committed suicide when he turned 30. Throughout his life he felt lost and was met with hostility and prejudice instead of encouragement.

The story of Kolompár is still of relevance today; the social system does not support underprivileged young people, who grow up in extreme poverty and leave the state educational system with insurmountable disadvantages.

The members of Gruppo Tökmag, András Tábori and Tamás Budha, live and work in Budapest.