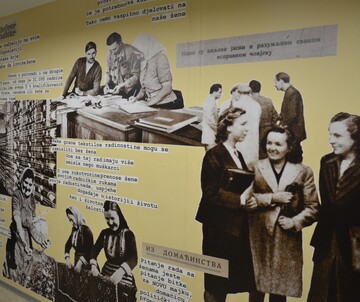 After the US presidential election, the Women’s March on Washington in the winter of 2017 brought thousands out onto the streets to protest against racism and misogyny. Solidarity marches in numerous other cities and countries followed. Pink pussyhats became the global symbol of the protesters, whose position is anchored in the feminist women’s movement and in queer activism. These handmade hats recalled the colourful balaclavas worn by the members of Pussy Riot, the punk band critical of the Russian government. Their ‘punk prayer’ action in Moscow’s Christ the Saviour Cathedral was a protest against the Russian Orthodox Church’s demand for a ban on abortion, among other things. It gained the group world-wide attention as three members were arrested. The arrests triggered a global wave of solidarity. Femen, the activist group founded in Kiev, also uses its attention-grabbing topless actions to mark its feminist position and sees itself as a new global women’s movement.

These three examples show that feminist  rotest actions are topical, globally networked and carried out as or influenced by artistic practices. The symposium is intended as an opportunity to examine the state of feminist art practices and how artists and curators engage with feminism. The focus is on our interest in the collective, or rather, the classical feminist topic of collective work.

Essential impulses for this event are the Manifesto For The Gynecene by Raluca Voinea and Alexandra Pirici; the Feminist (Art) Institution, a series of lectures and seminars initiated by Tereza Stejskalová; Adela Jušić‘s artistic research into the role of the women partisans; the collective practice of artist duo Anetta Mona Chişa and Lucia Tkácová, and the Series of artist talks on shared necessities organised by Katrin Hornek and Johanna Tinzl in the Austrian Association of Women Artists (VBKÖ) in Vienna.