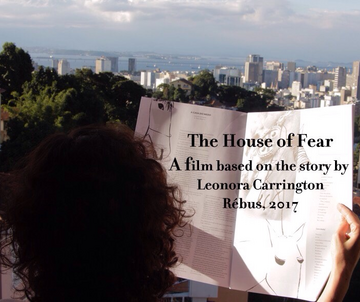 Cinepoem Rébus presents short films by Brazilian artists and poets who collaborated in the latest edition of the publication Rébus#8.
Followed by an Artist Talk with editor Thais Medeiros and curator Ursula Maria Probst.

Program:
Nefelibeater (2015) 5' min - Nefelibata are people who live in the clouds. Videoart by Claudia Hersz;

The House of Fear (2017) 5' min - Film by Thais Medeiros based on the story written by Leonora Carrington;

OCE - Offer (2013) 4'- Ecological offering on the day of Yemanja. This work by Alessandra Vaghi questions the offerings thrown into the sea. Filmed by Marc Aymonin in Salvador, Bahia;

MiniBio:
Alessandra Vaghi is a visual artist who lives and works in Rio de Janeiro.

Claudia Hersz is a multimedia artist who graduated in Architecture at the UFRJ. Represented by the Jaime Portas Vilaseca Gallery.

Gab Marcondes is a doctor, poet and visual artist. She has a master's degree in Music from UFRJ with the dissertation "Sound Poetry; Between Sound and Word".

Gabraz is a visual artist and filmmaker. He has directed experimental features about the work of contemporary writers in Portuguese such as Manoel de Barros. Recently released "Eu Sou o Rio (I am Rio)", about the artist Tantão.

Maya Inbar is a visual artist and educator. Her practice investigates the cultural processes of narrative constructions and their political implications.

Thais Medeiros is an artist, translator and the editor of Rébus. She has a master's degree in Visual Arts from the School of Fine Arts of EBA/UFRJ (2009). Her work is based on several recurrences of image / text as a means of intervention in space.