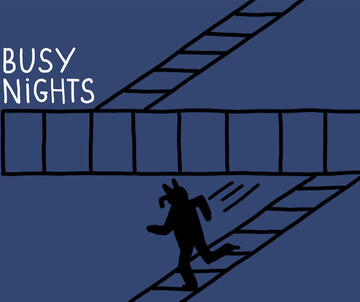 OBOM (Diane Obomsawin) has parallel careers as a renowned graphic novelist and animator. In both film and print, she creates characters that inhabit a funny offbeat world, a gently absurd universe filled with tenderness. She has published books with the Canadian publishing houses L'Oie de Cravan and Drawn & Quarterly. Her most recent animated short film "I Like Girls", won the Grand Prize at the Ottawa International Animation Film Festival in 2016 and was shown at Tricky Women Festival in 2017.

On invitation of KABINETT, Obom is Artist-in-Residence in MQ in July 2017. Her exhibition and booklet "Busy Nights" - three stories based on Obom's dream diary, will be shown in KABINETT as of 11 July 2017. Obom will held a lecture on her unique work as illustrator, graphic novelist and filmmaker on July 20, 2017.