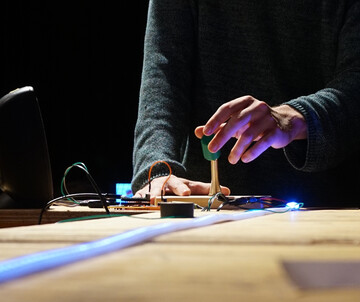 For six years now, the collective zamSpielen has promoted games as a social interaction. For one day, zamSpielen will move into the MuseumsQuartier and, in cooperation with institutions of Q21, will deal with the different aspects of games production.

The Electric Avenue and the MQ's courtyards turn into a play-ground: from local-multiplayer-games to interactive gaming stations to board games, vistors can test the newest games, game prototypes, and game experiments. For this, zamSpielen brings the developers of Line Wobbler and Chalo Chalo (among other things) to Vienna.

A special guided tour leads visitors to the indie game developers Broken Rules who have their office in the MuseumsQuartier. They will give insights into their past and future projects - from their first game „And Yet It Moves“ to their newest „Old Man’s Journey“.

Under the motto "Art & zamSpielen", analogue games are combined with current art production at the eSeL Rezeption.

Finally, Austrian game developers will present their works-in-progress as well as their finalised projects as part of the „SUBOTRON Austrian Games Night 2016“.

Showrooms Q21 program in December
Back to main navigation