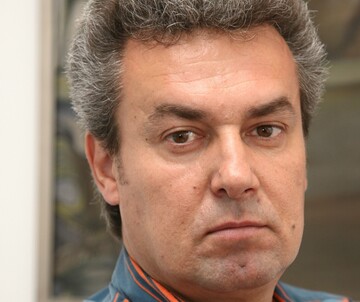 The Romanian Cultural Institute in Vienna in collaboration with quartier21 / MuseumsQuartier and Labyrinth (Association of English-Language and International Poets in Vienna) present the current Writer-in-Residence Nicolae Coande (ROU) at quartier21/MQ, with guest poets Hanane Aad (Vienna/Beirut) and Peter Waugh (Vienna/London).
With music by Sandro Miori (Vienna/South Tyrol) on saxophones, flute and harmonica. All abroad!

Nicolae Coande, poet and essayist. Lives in Craiova, but at present writer-in-residence at Quartier 21, Museumsquartier, Vienna.  Dramaturge at the National Theatre “Marin Sorescu”, Craiova, and editor-in-chief of the Theatre’s magazine, “SpectActor”, member of Writers' Union of Romania. He has published eight collections of poetry in Romanian: On the Edge (1995); Fincler (1997); The Dead-End Road Named Homer (2002); Folfa (2003); Wind, Tobacco & Alcohol (2008); The Woman that I Write About (2010); VorbaIago (2012; Persona (2013). He has also published four collections of essays, the most recent of which is Romanian Intellectuals and the King's Court (2011).  He has received several awards for his poetry: „Ramuri” magazine award for poetry (1988); Writers Union from Romania poetry award for debut (1995) for the book „On the Edge”; The Writers Association award for poetry (1997) for „Fincler”; Writers Union from Romania poetry award (2002) for the book „The Dead-End Road Named Homer”; The poetry award „Petre Pandrea” given by the literary magazine „Mozaicul” (2004); The poetry award given by the literary magazine „Ramuri” (2006); The essay & poetry awards given by the literary magazine „Argeş” and „Hyperion” (2013).

In 2003 he received a four months grant from Heinrich Böll Foundation (Köln) – November 2003-February2004; He received another scholarship from the „Künstlerdorf Schöppingen” Foundation for the period of July-August 2008. In 2012 he was invited by the Goethe Institut Berlin at the meeting of theater experts from South East Europe on the theme of documentary theater. In 2013 he participated in 4.höfleiner donauweiten poesiefestival, Höflein an der Donau (Austria), organized by Peter Waugh. His work has been included in the anthologies Gefährliche Serpentinen – Rumänische Lyrik der Gegenwart (Druckhaus Verlag, Berlin, 1998), edited by Dieter Schlesak; Of Gentle Wolves (Calypso Editions, New York, 2011), translated and edited by Martin Woodside; The Vanishing Point that Whistles (Talisman Press, USA, 2011), edited by Paul-Doru Mugur, Adam Sorkin, and Claudia Serea.

The Lebanese poet Hanane Aad has lived in Vienna, Austria, since 2009. She is a journalist working in the print media, radio and television. She is also a translator. She has published five books in Beirut, four of which are collections of poetry: I Carry my Freedom in my Mouth, Dergham, 2010; Pearls of the Soul Riding Virtue, Al Ibdaa, 2005; Like a Grain of Wheat, Kleudge, 1999; The Echo of Nostalgia, Almacharek, 1992. Written in Arabic, her poetry has been translated into many languages, including German, English, French, Spanish, Dutch, Italian, Russian, Japanese, Romanian, Estonian, Turkish, Hindi, Bosnian and Bulgarian. She has read her poetry in many countries in Europe and Asia and it has been published in many international literary journals and websites in various countries. Last year she won the Award for Excellence at the Tudor Arghezi Literature Festival 2014 in Targu Giu in Gorj, Romania, and in 2011 she received the Award for Excellence in Foreign Poetry at the Poesis Festival in Satu Mare, Romania

At the Lebanese newspaper An-Nahar, where she worked between 1995 and 2005 her name will always be associated with a long series of major interviews with outstanding French-speaking cultural personalities, many of whom are famous worldwide, such as Andreï Makine, Andrée Chedid, Tahar Ben Jelloun, René de Obaldia, Eric-Emmanuel Schmitt, Vénus Khoury-Gata, Michel Deguy and others. On the occasion of the French-langauge summit which took place in Lebanon in 2002, she published Dialogue of the Cultures and the Love of Language, which collected 22 of the above-mentioned interviews.
As a translator she has translated the 450-page historical novel entitled Le roman de Beyrouth by the Lebanese author Alexandre Najjar, and the novel L’imposture des mots by the Algerian author Yasmina Kadra, both from French into Arabic.
The poet Hanane Aad holds a Diploma of Higher Studies in Journalism and Communication from the Faculté d’Information et de Documentation de l’Université Libanaise and the Université Panthéon-Assas Paris 2. In 2001 she won the international award for Excellence in Journalism of the International Catholic Union of the Press, as well as the Prize of the Lebanese Ministry of Culture in 2000.

Peter Waugh was born in Barnet, London (1956). Long-term Vienna resident. Poet, translator, creative writing teacher, lecturer at University of Applied Arts in Vienna, editor, publisher, songwriter. Co-founder of Labyrinth (Association of English-Language and International Poets in Vienna), the poetry journal subdream and the experimental sound poetry performance group ‘dastrugistenda’. Organiser of numerous readings in Austria and abroad, including a monthly open-mic and summer Poetry in the Park events in Vienna, as well as the annual Labyrinth Höflein Donauweiten Poesiefestival. Often performs as a sound poet and with musicians, most recently the Vienna Improvisers Orchestra. Publications: Horizon Firelight (1999) and Haiku Butterfly Death Dream (2002). Featured in magazines and anthologies, on websites and at poetry festivals worldwide. Numerous German-English verse translations. Finalist at the Berlin Slam Poetry Days, Berlin, 2009. Tudor Argesi Recognition Prize at the Tudor Arghesi Poetry Festival, Romania, 2014. In his work he attempts to exp Hanane Aad and the boundaries of poetry into as many different dimensions as possible. His work ranges from the lyrical to the experimental, from the haiku quietness of the written word to presentation that includes other art forms such as music, dance or theatre, from experiments in multivocal and translingual writing and performance to exercises in poetic forms, from solo abstract sound poetry to collaborative group improvisations or arrangements involving live music.