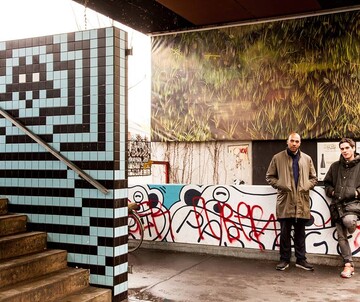 The MQ Facebook page presented three pictures by the Viennese artist Alexander Ruthner. Facebook users picked the one to be displayed in full size in the STREET ART PASSAGE VIENNA.
The project marks the beginning of a long-term partnership between STREET ART PASSAGE VIENNA and BLK River. The project deals with altered communication behaviour in social media and its effects on the integrity of contemporary art and artists.

Alexander Ruthner’s work explores the medium of painting, its process, and its application. It can be understood as a means to reflect on media and introduce questions that remain unanswered; the point, after all, is not so much to take a clear position as it is to present facts in a way that appropriately reflects their complexity.

BLK River views itself as an initiative for art in public spaces that seeks to expand awareness of this form of encountering contemporary art.
The Danube is sometimes also called the Black River, but less due to the quality of the water than to the fact that it flows from its source in the Black Forest to the Black Sea. And because the color black is not just a physical phenomenon, but on the basis of cultural traditions is also associated with values like radicalness and differentness, Sydney Ogidan’s team decided to take the Black River as an inspiration for the name they chose. BLK River focuses on developing art projects and creative positioning for brands, companies, and the public sector.