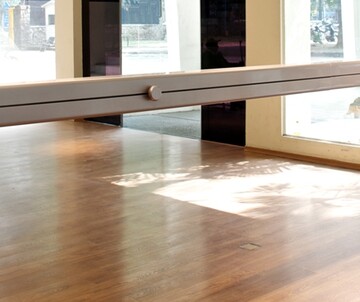 The exhibition In Suspension shows a single work of the artist Rini Tandon. The three meter long object is alienated from its digital function to operate as an indicator of a larger “sculptural drama”(Tennessee Williams), assuming the space we walk in. The object Juxtaposing The Absent levitates as a time-bar in real space between two worlds of fluctuating juxtaposition, linking and annulling two realities in diametrical opposition. The real and the artificial neither refer to given sequences nor the organization of imagery, but to a continued montage of absences in the present. Suspending the virtual, the dislocated object serves the position of an unsigned witness that holds no point of view.
Rini Tandon, born in India, has lived and worked in Vienna since 1978. Her unique position in approaching sculptural space has taken her to noteworthy exhibitions in institutions such as the Kunsthalle Oslo (1986); Aperto, Venice Biennial (1988); Anina Nosei Gallery, New York (1989); Austrian Sculpture, Generali Foundation/ Secession, Vienna (1990); Visionary Positions, Fundacao Calousto Gulbenkian, Lisbon (1998); Positions of Women Artists from 1945 till Today, Kunsthalle Krems (2003); Lentos, Kunstmuseum, Linz (2006); The Content of Form, Generali Foundation (2013) and in single shows such as at Grita Insam Gallery, Vienna (1986); Mindy Oh Gallery, Chicago (1993); Chemould Gallery, Bombay (1993); Landesmuseum Joanneum, Graz (2000); Nature Morte Gallery, Berlin (2009) or Raum Mit Licht Gallery, Vienna (2011).