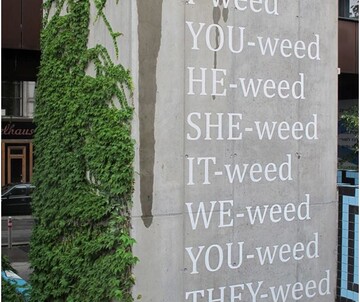 Lois Weinberger’s idea for the piece was inspired by an old plant book describing the enormous seed production powers of henbane: within five years, the plant could cover the entire land surface of the planet. Weinberger began to conjugate the word henbane, which in German is a compound word ending in the word kraut (weed), arriving at Ichkraut, Dukraut, Eskraut, Wirkraut, and so on (Iweed, youweed, itweed, weweed). In the English language, the words scintillate with the double meaning of to weed / weed / marijuana. The act of conjugation additionally introduces an appeal: those who want to get rid of weeds should weed them out themselves.