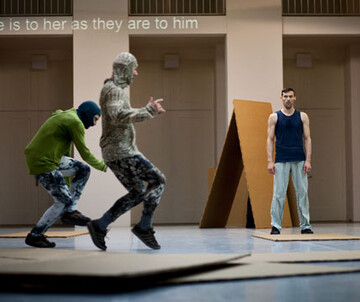 Between avant-garde and virtuosity, between the zest for dance and movement research, William Forsythe\'s choreographic works in the last two decades have not just renewed the codes and possibilities of classical ballet. Rather his artistic work, in its very characteristic combination of movement, language, architecture, music and technology, has left traces going far beyond in the field of contemporary art. With Sider, the exceptional choreographer and his outstanding company, who captivate through their movement technique and improvisation, are showing one of their latest performances at the Tanzquartier Wien.

The large-scale work is inspired by the theatre tradition of the age of Shakespeare. Like that of classical dance, the rhythmic intonation of Elizabethan theatre has cultivated its own tradition, passed on from actor to actor for over four hundred years. In Sider these complex speech patterns are played to the actors through a cinematic soundtrack, and cause disquieting configurations of incongruous musicality.