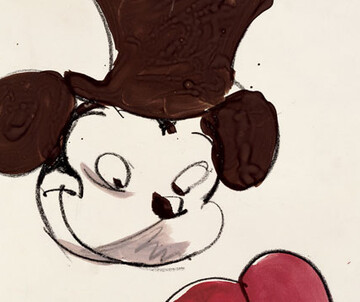 With his humorous and profound depictions of everyday objects, Claes Oldenburg is one of the most important and popular artists since the late 1950s. Not only has he been a major figure in Pop art, performance art, and installation art but he has also been in partnership with Coosje van Bruggen a profound influence on art in public spaces with his monumental \"Large Scale Projects\" in numerous major cities worldwide. One central point of reference in Oldenburg\'s oeuvre is the industrially produced object-the object as commodity, which in ever new metamorphoses of media and form becomes a conveyer of culture and symbol of the imagination, desires, and obsessions of the capitalist world.

Organized by mumok, this is the largest show ever of Oldenburg\'s path-breaking and emblematic early work of the 1960s. Numerous icons of Pop art will be seen in the exhibition, beginning with the installation The Street and its graffiti-inspired depictions of modern life in the big city and continuing to the famous consumer articles of The Store to the spectacular everyday objects of the \"modern home\": telephone, toilet bowl, bathtub, fan, saw, and light switch. Another chapter is
dedicated to Oldenburg\'s first designs for enormous monuments of his consumer objects for public spaces. The exhibition concludes with mumok\'s Mouse Museum, a walk-in miniature museum in the form of a Geometric Mouse, for which Oldenburg has collected 381 objects since the late 1950s. With its souvenirs, kitsch objects, and studio models, the Mouse Museum demonstrates the incredible cultural variety- and mysteriousness-of capitalist society. The Geometric Mouse, a central motif within the artist\'s oeuvre, represents with its reduction to abstract basic figures of formal invention a dovetailing of high art and popular culture. It also functions as Claes Oldenburg\'s alter ego.

No other artist of the modern era has thematized to the same extent the traditional oppositions between the work of art and the commodity, the museum and the department store, the contemplative appreciation of art and fetishized consumer behavior. Oldenburg is interested in the ambivalence of the modern world: the \"genuine\" is sought in the cliché and, conversely, the vulgar in serious art. \"Painting,\" so Oldenburg, \"which has slept so long in its gold crypts, in its glas graves, is asked to go for a swim, is given a cigarette, a bottle of beer, its hair rumpled, is given a shove and tripped, is taught to laugh, is given clothes of all kinds, goes for a ride on a bike, goes flying, goes driving at 100 mph.\"

It is a special privilege for the mumok to be able to realize this exhibition in collaboration with Claes Oldenburg, who was born in Stockholm in 1929. Works and groups of works that have been rarely or even never before seen could thus be integrated into the presentation: drawings, photographs and films by the artist himself, and especially notebook pages that offer unique insights into his witty thought processes. In addition, since the 1960s Oldenburg has set in motion an analytical and humorous game with the conditions and forms of presentation of modern exhibitions: sculptures hang on the walls or swing from the ceiling; they are placed too low or too high; pedestals are too large or too small; and his \"soft sculptures\" change scale and consistency. The whole scenery of the exhibition seems like a carnivalesque theatre play performed by objects from our daily lives.