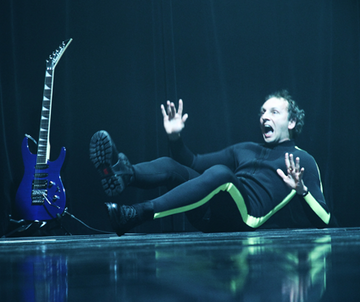 When the world has ended: A Visit To This Planet, Part II, the second part of Oleg Soulimenko\'s choreographic excursion which he began in 2010 at Tanzquartier Wien, does not focus on promises of the future, but on a situation after the apocalypse. The scenario: four performers stranding on a planet named »Earth« during a research trip, where - accompanied by peculiar auxiliary devices reminding one of electric guitars - they find the most diverse areas and materials of cultural production - dance, theatre, pop music and poetry. Their investigating gaze from outside uncovers a human paradox. For although they seem to be frightened by all kinds of global crises, the private lives of Earth\'s citizens seemingly remain untouched by that; although the next war is only a few hundred kilometers away, it seems to be captured and kept at a distance in almost surreal, filmlike images and photos. A performance in search of the end\'s possibilities and the question about our own position in the world of today.