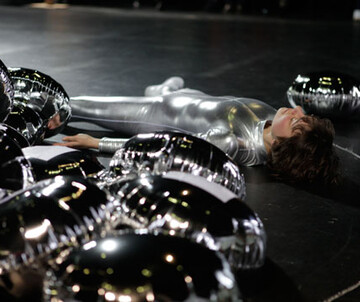 The point of origin of the last part of the artisttwin deufert&plischke’s ANARCHIV series is one of the most famous and massive works about love and war: The Nibelungenlied and Richard Wagner’s opus Der Ring des Nibelungen. With the help of their method of re-formulating which they developed over a period of ten years, and together with Alain Franco who accompanies the performance live on the piano, with texts by the art philosopher Marcus Steinweg, and the performers, they circle, feed and weave the complex subject matter, creating a serious, multilayered yet playful parcours; a changing space of several perspectives, in which all participants are freely creating their own way through the materials, stations and instructions. Not only does the great saga elude complete understanding in this dynamic of re-telling and re-assembling which denies a premature representation of participation, but – according to the artistwin’s consequence – our lives do, too.