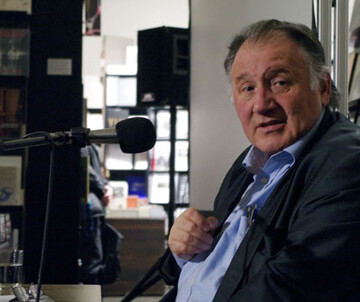 The list of significant and influential artists who have been invited by TONSPUR to dedicate themselves to acoustic installations and engage with strategies and mechanisms of sound works placed in public urban space continues with the artist, curator, theorist, professor, and director of the Zentrum für Kunst und Medientechnologie (ZKM) in Karlsruhe, Peter Weibel [*1944, Odessa, Ukraine].

For five years now, the TONSPUR_passage in the MQ Wien has been the permanent venue for, i.e. the place to see and hear, the results of this artistic practise. It is a genre that has gained in significance since the American musician and pioneer of sound art Max Neuhaus established his \"Drive in Music\" in 1966, writing that: \"The Passage works are situated in spaces where the physical movement of the listener through the space to reach a destination is inherent. They imply an active role on the part of listeners, who set a static sound structure into motion for themselves by passing through it\".

We are delighted that Peter Weibel has agreed to participate in TONSPUR 42 für einen öffentlichen raum, so flanking his theoretical and communicative engagement with sound as a raw material for making art by completing an art project of his own in this context. It is not least his statement that \"sound art has become one of the key currents in the art of the 20th century\" which has raised the status of artists who work with sound to the same level as proponents of the more ‘classical\' disciplines.

Two major sound projects in the public space of Vienna over the coming months also worthy of appraisal: Matthew Ritchie\'s sonic pavilion \"The Morning Line\" for T-B A21 on Schwarzenbergplatz and Andres Bosshard\'s \"KLANGHIMMEL MQ\" as a TONSPUR_extra ∞ european_TONSPUR and part of the 10th jubilee of the MQ in the main courtyard of the MuseumsQuartier. [g.w.]