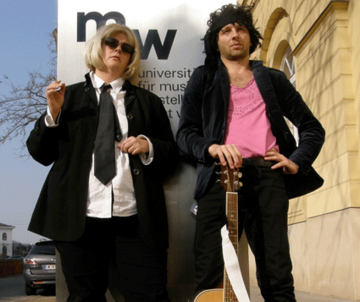 When a song makes a comeback and sings about the time loop of its own return, then this is the magic of that strange gift to the collective soul that is Afro-American-British pop music.
12 Songs is a historical-emotional voyage of discovery through the history of pop music that narrates itself through its songs.
The performance is simultaneously n experimental arrangement and a night club of memories.
How does this enormous memory embody itself?
Are we »passengers« (Iggy Pop) who glide through the songs as they do through us? And how to show that after he\'s been so long coming he\'s also a long time gone (Crosby, Stills, Nash: Long Time Gone) - the Möbius band of the revolution. The »songs« are played around with, quoted, condensed, stretched, evaded and commented on in various ways.