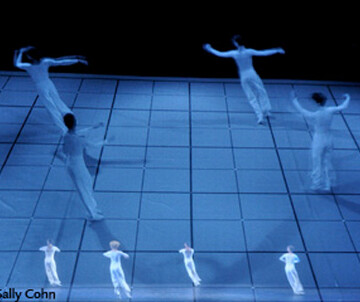 Lucinda Childs (USA): DANCE
European Première of the revival with a new cast
In the frame of the performance series and the exhibition Push and Pull

With DANCE one of the American choreographer Lucinda Childs\' most striking works and at the same time a formative work of recent dance history is appearing at the Tanzquartier Wien. An inventive series of visual manipulations and changes of orientation develops out of the gracefully built, abstract composition of flowing movement sequences and acoustic and spatial counterpoints. The revival of the work can now be seen in Europe for the first time with the recast by the company. For this purpose both the music by the composer Philip Glass has been replayed and the black-and-white film by the concept artist Sol LeWitt, the projection of which determines the stage set, has been produced completely afresh. An invitation to the audience to follow the brilliant collaboration between three of the most famous representatives of the American avant-garde and post-modern dance and to dive into their dialogue of perfect synchronisation and dynamic interaction.

Production: The reconstruction of DANCE was commissioned by the Richard B. Fisher Center for the Performing Arts at Bard College. WITH ADDITIONAL SUPPROT from The Yard, a colony for performing artists on Martha\'s Vineyard, Wendy Taucher, Artistic Director. DANCE by Lucinda Childs was made possible by the National Endowment forthe Arts\' American Masterpieces: Dance initiative, administered by the New England Foundation for the Arts.