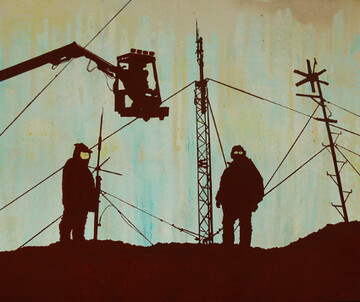 Street and Studio
From Basquiat to Séripop

The major summer exhibition highlights the dynamic production of a contemporary generation of artists characterized by urbanity and mobility, for which the metropolis is both source of inspiration and medium of expression. The exhibition\'s center of gravity and point of departure is the US painter Jean-Michel Basquiat, whose works are - unconsciously or explicitly - reinterpreted as landmark reference points for the oscillating forms of painting, photography, and video art relating to street culture.
In the exhibition, the slogan \"Reclaim the Street!\" not only provides a common denominator for the numerous strategies of urban \"resistance movements,\" but may also be found as a programmatic approach in more recent positions like those of Rita Ackermann, Kader Attia, Ari Marcopoulos, Christian Eisenberger, and Séripop, as well as of declared street artists such as Brad Downey, Evan Roth, or Mark Jenkins who explore the visual appearance of their urban environs and have repeatedly criticized the invasion of the commercial escalating on a global scale and the surveillance of public space in their works.