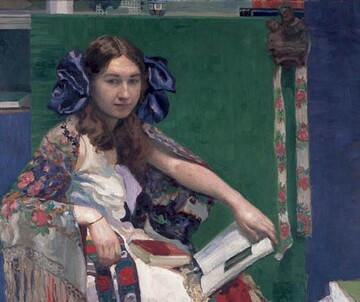 The LEOPOLD MUSEUM is going to show the first big exhibition of Josef Maria Auchentaller in Austria. Josef Maria Auchentaller (Vienna 1865 - Grado 1949) was one of the artists who participated in the Viennese art revolution that occurred at the beginning of the 20th century. For more than a decade, the painter and graphic artist was an active protagonist of the Secession, which had been founded by Gustav Klimt in 1897. He participated in the Secession exhibitions around 1900, at times in a position of responsibility for organisation, and was also involved in the publication of the magazine \"Ver Sacrum\", the Secession\'s official organ. His decision to leave Vienna in 1903 and to risk the \"tourist\" adventure in Grado isolated him prematurely from the Vienna art scene.

During recent decades, art historians have found it difficult to firmly establish Auchentaller\'s position among the Viennese Secession artists. First and foremost, in making an adequate assessment of his achievements scholars have been faced with the difficulty of tracking down his works (many of which are in the private collections of his heirs), with the result being that the artist has remained more or less unknown. The unpublished dissertation by Vera Vogelsberger (Innsbruck, 1985) represents the only major research effort in recent years, and it constitutes the first serious attempt to examine and catalogue Auchentaller\'s paintings and graphics.

The current exhibition has come about thanks to the readiness of the heirs to provide works on loan, the wish to make available to the public the work of an artist who has received so little attention, and the conviction that the true meaning of the Vienna Secession can best be understood by increasingly broadening the art-historical perspective to include as many of the artists involved in the turn-of-the-century movement as possible. The show was conceived as a travelling exhibition and was first presented in Gorizia, where it was on view at the Musei Provinciali in the Palazzo Attems-Petzenstein from April through September 2008. Between October 2008 and January 2009 it is being shown at the Galleria Civica in Bolzano. In the summer of 2009 it will be presented at the LEOPOLD MUSEUM in Vienna.

The exhibition is divided into eight sections and includes approximately 300 works: paintings, drawings, studies, posters, designs, jewellery and photographs, many of which have never been shown publicly. Auchentaller\'s artistic development is traced through his training in Vienna and Munich and the decisive influence exerted on his work by the Vienna Secession as well as in his later years, when he settled in Grado and devoted his artistic energies to landscapes and portraits.