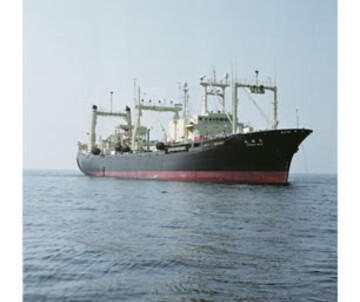 This exhibition was produced in cooperation with the Serpentine Gallery, London.

Matthew Barney is one of the best known artists of his generation. Born in 1976 in San Francisco, he studied Fine Arts at Yale University in the late 1980s. His multilayerd work has been rapidly acknowledged by the critique, foremost his Cremaster-cycle, which was produced between 1994 and 2002.
Designed to be a comprehensive „narrative sculpture“, his artistic practice covers a varied range of artistic forms of expression, from film, photography and drawing to performance, installation and sculpture, which generate each other continually. His multi-part work cycles are described by the artist himself as meditation on the creative process. Athletics and biological laws provide the analogous model with which Barney makes an attempt to explain artistic production: the artist as athlete, creating form according to the principle of building up muscle, which only takes form in the struggle against resistance. The exhibition of the Kunsthalle Wien in cooperation with the Serpentine Gallery in London focuses on the 15-part series Drawing Restraint which came about along this scaffolding of thought. In keeping with the artist’s concept, it realizes the idea of the total work of art, whose connecting threads come together in his latest film production, Drawing Restraint 9 (2005), which is to be shown for the first time in Austria in the accompanying program. With Matthew Barney and his wife Björk in the main roles, the film tells a tragic love story set on a Japanese whaling ship. Using extensive technology, fittings and costumes it permits a mythical parallel world full of complex symbolism to arise, which finds an echo in the exhibition pieces as part of a hermetic system of meaning.
Matthew Barney received the Hugo-Boss-Prize in 1996. In 2002, the Solomon R. Guggenheim Museum organized an outstanding show of the entire Cremaster-cycle that traveled to Museum Ludwig Köln and Musée d\'Art moderne de la Ville de Paris. Drawing Restraint was shown recently in the 21st Century Museum of Contemporary Art, Kanazawa, Japan (2005), in the Leeum Samsung Museum of Art, Seoul (2005) and in the San Francisco Museum of Modern Art (2006). The exhibition at the Kunsthalle Wien is a continuation of the joint work with Matthew Barney in 1997, 2000 and 2002, where works from the Cremaster cycle were presented in Vienna. In 2008, a new video work, Drawing Restraint 16, will be shown for the first time. Matthew Barney lives and works in New York.