The MuseumsQuartier Wien in 2008

The MuseumsQuartier Wien in 2008 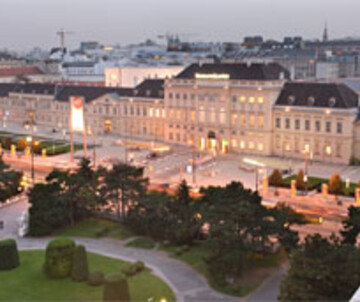 The MuseumsQuartier Wien is one of the ten largest areas for contemporary art and culture in the world. All year round, more than fifty art and cultural institutions offer an extensive program in 60,000 square meters of space right in the heart of Vienna.

In 2008, many exciting, entertaining and fascinating highlights are waiting for you again - visual arts, architecture, dance, children\'s culture, fashion, film, literature and much more. Below you find a brief preview of the 2008 program of the cultural institutions of the MuseumsQuartier Wien, last updated in December 2007. (All information subject to correction and change)

Punk - No one is innocent
Stylistic rebellion, art attack and social subversion
May 16 thru September 7, hall 2

Modern Art of the Färöer Islands
May 16 thru September 7

Ronacher Mobile \"Forbidden Ronacher\"
A shameless musical persiflage - a satirical glance on the genre of the musical is cast by means of the stylistic devices of exaggeration and hyperbole.
World premiere end of March, Hall E Until April 26

Wiener Festwochen, May thru June. A Selection from the Program:

ESTHER SALAMON (HU/D)
AND THEN. A project by IDEE (=Initiatives in Dance through European Exchange)
January 31 thru February 2,  8.30 pm
TQW/Hall G

EU Series of Lectures \"Let\'s talk about Europe\"
A cooperation of Allianz Cultural Foundation, the Burgtheater, the daily newspaper Der Standard, the Institute for Human Sciences (IWM) and the Tanzquartier Wien
January 20 & February 24, 11 am, Burgtheater

Winter Academy- Let Us Say We Cross Over
Young people from Berlin, Istanbul and Vienna work together with artists. The results of the collaboration will be presented in Berlin and Istanbul.
February 11 thru 16

DSCHUNGEL WIEN MODERN
For the fifth time, the contemporary music festival presents a separate festival series in the fields of music theater, performance and theatrical music for a young audience.
November 2008

Life and Thinking in Ancient Greece
A participatory exhibition for kids from 6 to 12 years
September 23, 2008 thru February 7, 2009

Ursula Göhlich
Shovel Tuskers and Other Beasts: About Mammoth and Extinct Elephants
Feb 3

Rudolf Taschner
The Stars Follow the Numbers: The Origins of Mathematics
Feb 24

Constanze Wimmer
What Does Rhythm Do in Music?
March 9

Freiraum: The Viennese Couture of the Second Republic
August

International Artist-in-Residence Program
The AiR program of the quartier21 goes into its sixth year. So in 2008, once again more than thirty artists from all over the world will be invited to stay in one of the five artists\' studios of the quartier21.