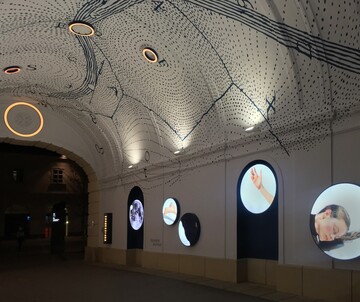 Sternenpassage ("stars passage") is one of MQ Wien's eight micro museums scattered across the museum complex. Each of these publicly accessible passages is dedicated to one specific art form, including sound art, street art, comic art, typography, photography, and more. Together, they contrast with and complement the surrounding larger museums.

MuseumsQuartier's barrel vaults date back to the Baroque period; fittingly, Sternenpassage's fresco is based on a diagram of the same era. It offers a glimpse of space as imagined by French philosopher René Descartes (1596-1650): depicted is a comet's elliptical path across the heavens, held in place by particles of matter which Descartes believed made up the universe.

In its capacity as a micro museum, Sternenpassage highlights artists whose work broadly relates to photography. Artists are commissioned to create pieces specially for the passage. Each resulting series is presented across four illuminated circular display cases mounted on the walls, and accompanied by astrophotography.

Lumen Zine is a miniature catalogue supplementing exhibitions at Sternenpassage. It contextualises the art on display and is available from the on-site vending machine for 2 Euro.