„Stopover – Ways of Temporary Exchange“ is organized in cooperation with the Austrian Federal Ministry for Europe, Integration and Foreign Affairs.

Friendship and exchange, social movements and activism, the historical dimension of imperialism and its effect on the present, and the strengthening of new nationalisms: these are the themes of the new exhibition “Stopover – Ways of Temporary Exchange” at the frei_raum Q21 exhibition space. The show is based on the Artist-in-Residence program at Q21/MuseumsQuartier, which is carried out in cooperation with tranzit and the ERSTE Foundation . An accompanying program features a number of events and excursions offering opportunities for temporary exchange and a focus on process.

Since 2011, the Artist-in-Residence program at Q21/MuseumsQuartier has been working with tranzit and ERSTE Foundation to give artists from Romania, Slovakia, the Czech Republic, and Hungary the chance to live and work in a studio at the MuseumsQuartier in Vienna.

The focus of these kinds of art studio programs varies widely, offering both a space for self-reflection and inspiration, and the chance to work together and collaborate with local communities. But they always involve the participants leaving their familiar environment for a set period. This also allows residencies to provide an opportunity to engage critically with social or political themes relating to the artist’s home country and to push back against constraints.

The exhibition “Stopover – Ways of Temporary Exchange” views residencies as temporary, local stays that offer diverse possibilities for exchange between people from different surroundings. On the one hand, artists can address themes from their home  environment while, at the same time, finding inspiration in the new city where they are now living. The works on display in the exhibition originate in different stories which, as a rule, are rooted in the region the artists have come from. Simultaneously, they sketch out visions of a global future. In doing so, they all make an important contribution to artistic and cultural production within and beyond a region that has, in the past, often been referred to simply as “Eastern Europe.”

Nearly 30 years after the fall of the “Iron Curtain,” Vienna is still seen as a gateway between “East” and “West,” although this view is not without criticism. Partly this controversy stems from Austria’s history as a former imperial power, when Vienna in particular was a melting pot for different peoples in the period around 1899/1900. But Austria’s status as the neutral state of the “West” and as a destination for guest workers in the 1960s and 1970s also plays a role. Vienna, especially in the period after 1989, also welcomed artists and academics from neighboring countries and in doing so continued the long history of cultural exchange.

Recent years have seen the political and social climate across Europe deteriorate. Racism towards immigrants, refugees, and Muslims, and general hostility towards “Others” is on the rise. The exhibition “Stopover” showcases the different perspectives of the various artists based on experiences in their home countries and in the host city of Vienna where they live as Artists-in-Residence. Alongside social movements, activism, and feminist and antiracist discourses, a light is shone onto questions relating to migration, the situation and lives of refugees, border politics, and declarations of solidarity. Individual works by the artists are presented with reference to their dreams and their experiences of precarious living conditions.

For the duration of the exhibition, Romanian artist Cristina David will be “occupying” the exhibition spaces and utilizing them for her own needs. In doing so, she seeks to question how it can be that artworks are highly protected, taken care of, and awarded a great deal of valuable space when, in contrast, artists are often left to struggle with a precarious financial situation and poor living conditions. The architect Ana-Maria Machedon has designed and built real living quarters for David and she will take up residence at the center of the exhibition. David has prepared a series of events for the duration of her stay. These include a “Re-enactment of a Chess Game” in a joint performance with Michael Ehn, a Viennese chess historian. This will take place on October 7 as part of the 2017 “ORF Long Night of Museums” (ORF Lange Nacht der Museen).

The works by the Slovakian artist Oto Hudec are shaped by personal experiences, desires, and dreams, which he has built upon in order to address topics such as social and environmental activism, sustainability, community, exchange, migration, Roma life and culture, and respect for cultural traditions. As a member of the international creative organization “Make Art with Purpose,” he believes that art can inspire “conversations or small-scale actions” which are “part of a larger drive for change.” His installation “Long, Long Road” consists of a table covered in sand above which a film is projected onto a sort of large billboard. Both the projection and the projector become part of the landscape, symbolizing the image of a bright future that is the driving force on the migrant’s journey.

How is the image of a place developed and produced? How is it represented and communicated? With their project “Sissi Quartier” in the “MQ ART BOX” in the MQ Main Courtyard, Budapest-based art collective Polygon Creative Empire explores how economics and culture are intertwined and how space is constructed through social interaction. The region lying between the cities of Vienna, Bratislava, and Győr is known as the Golden Triangle, yet the area has never been fully integrated as a single region. “Sissi Quartier” is a fictitious property investment plan, a playful attempt to create a “region” which, while meeting the requirements of capital through its infrastructure and economic potential, makes no meaningful connection whatsoever to either the local population or the local context.

The work is being shown in cooperation with the “MQ ART BOX.” Since 2014, the “MQ ART BOX”, curated by Elisabeth Melichar, has provided an exhibition space for temporary art installations in the main courtyard of the MuseumsQuartier.

Johanna Tinzl and Stefan Flunger from Vienna move both literally and figuratively along the external borders of the European Union in their film project “La valla es europeo. The Fence is European. Der Zaun ist europäisch.” In locations where high fences, barricades, and military patrols are supposed to prevent migrants from non-European nations from crossing the topographical and/or political borders of Europe, the artists draw out the structural similarities between the places they visit, presenting them in the exhibition space as a visual essence of their travels.

At the end of the nineteenth century, artisans from Friuli came as migrant workers to areas throughout the Austro-Hungarian Monarchy, but in particular to Carinthia, to make latticework windows in brick. These were used to decorate window openings in barns in rural areas. Producing these windows required specialized artisanal and engineering skills, which did not exist in Austria at that time. The Austrian artist Hannes Zebedin draws on this tradition in his in-situ work “When Freedom Exists, There Will Be No State” in one of the windows of the exhibition space and is particularly interested in the associated cultural exchange. He shows the Friulian windows as artifacts of handed-down and intercultural transfers of skill and knowledge.

Most of the things we produce, sell, buy, or collect are ephemeral. This includes money. Money is a fictitious entity, a material promise that is taken (too) seriously. Its existence is based solely on trust and its fleeting value is dependent on human investment. This fascination with the ambiguity of money led the Romanian-Slovakian artist duo Anetta Mona Chişa & Lucia Tkáčováto cast a series of sculptures from melted-down euro coins for their work “Things in Our Hands.” Reflecting the history of money, these sculptures show the development from the concrete to the abstract. “Things in Our Hands” embodies the “before” and “after” in the existence of money in our world and materializes the starting point and endpoint of its progress.

In his work “Contingent Propositions,” Prague-based artist Zbyněk Baladrán addresses the consequences of political, ideological, and social systems—principally fascism and communism, but also capitalism. Using found newspaper images and text from source material such as the communist daily paper “Rudé právo" (1971-1989) and the post-revolutionary liberal daily paper “Lidové noviny” (1989-2008), he places these documents in relation to the 2008 global economic crisis and sketches an uncertain global future. Baladrán was also commissioned to create the exhibition design.

A comprehensive accompanying program that includes performances, excursions, and artist talks offers opportunities throughout the exhibition run for temporary exchange and a focus on process. 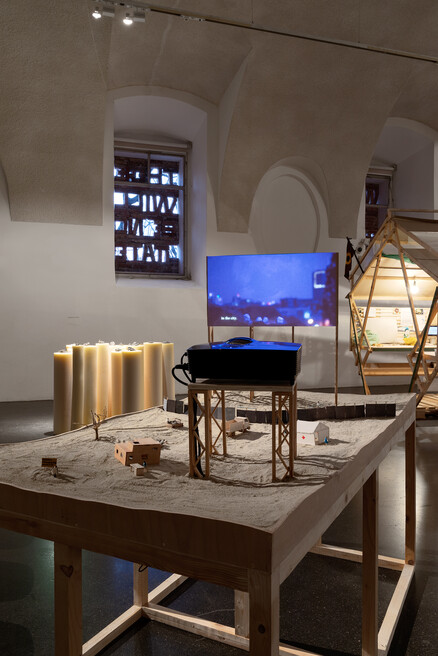 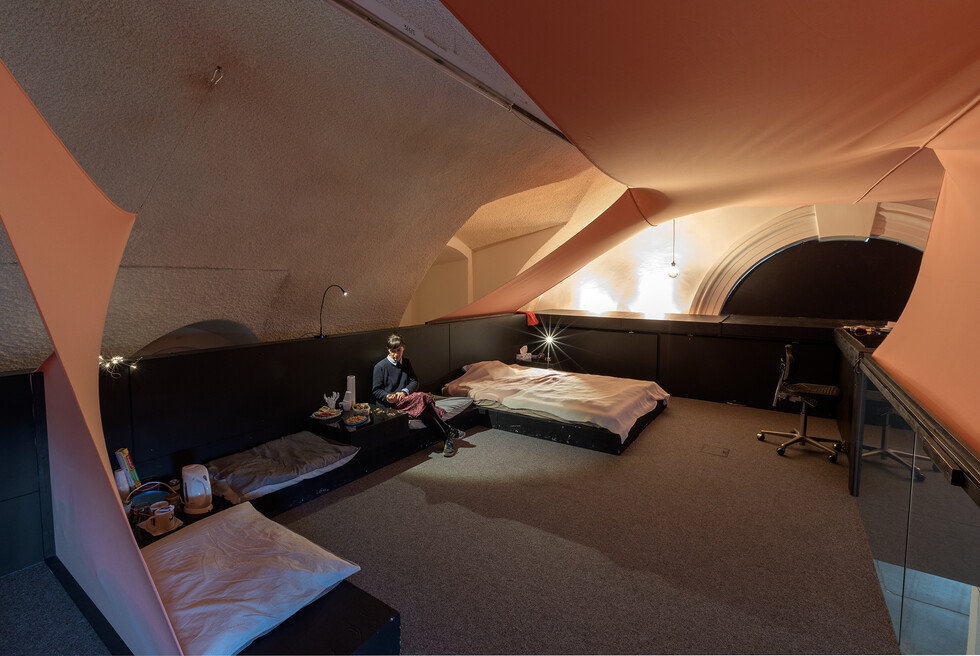 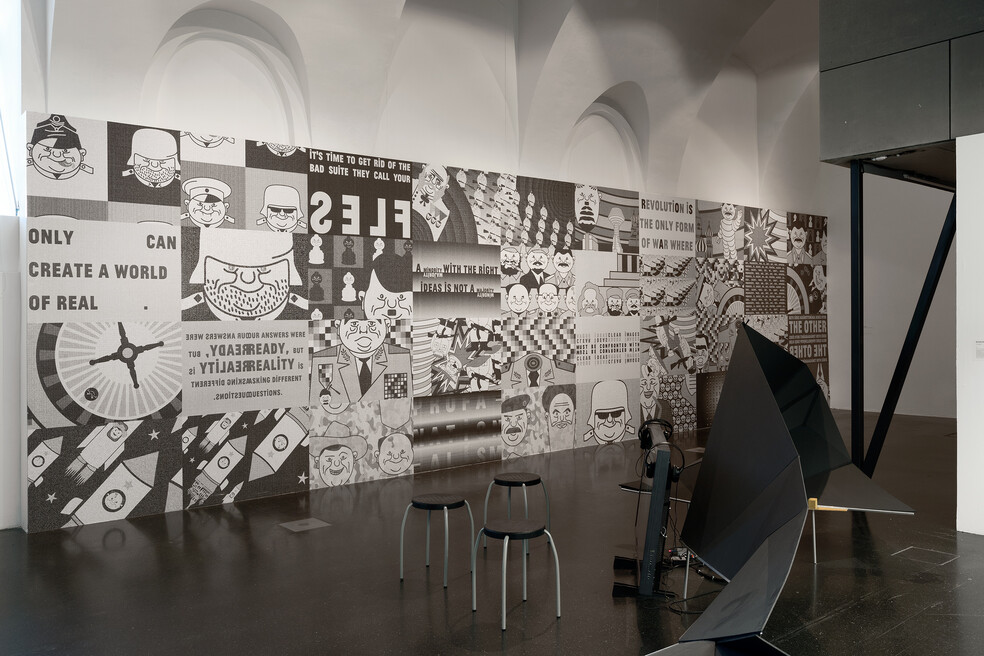 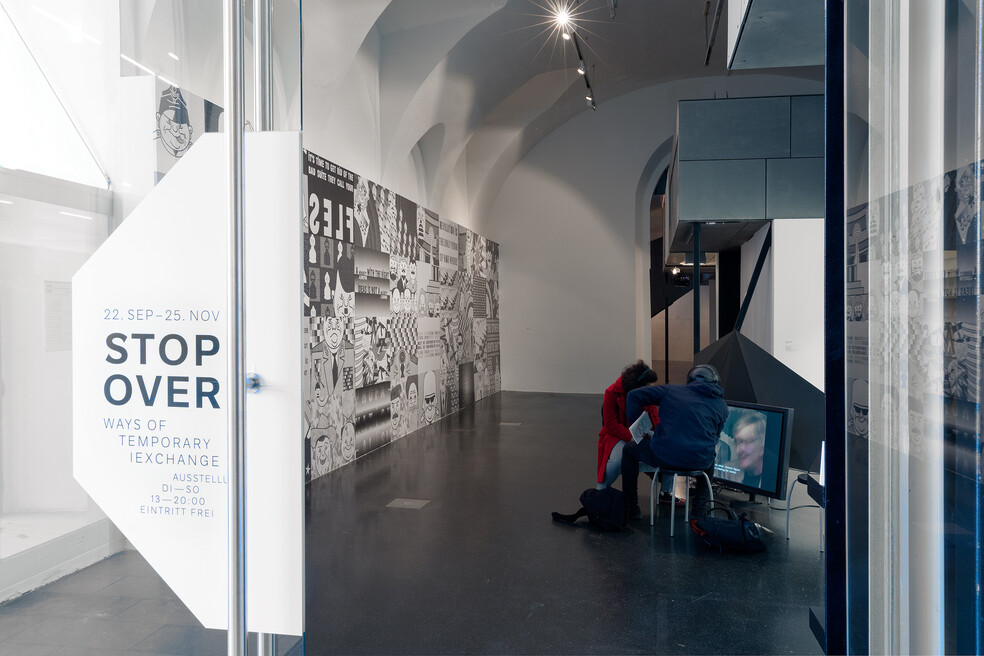 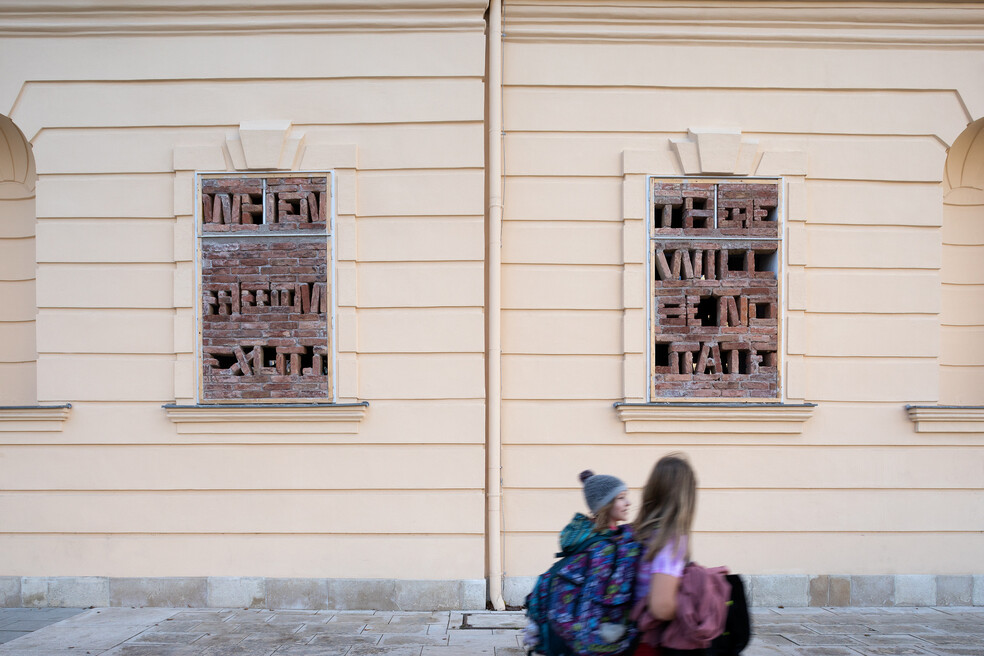 Hannes Zebedin: When Freedom Exists, There Will Be No State 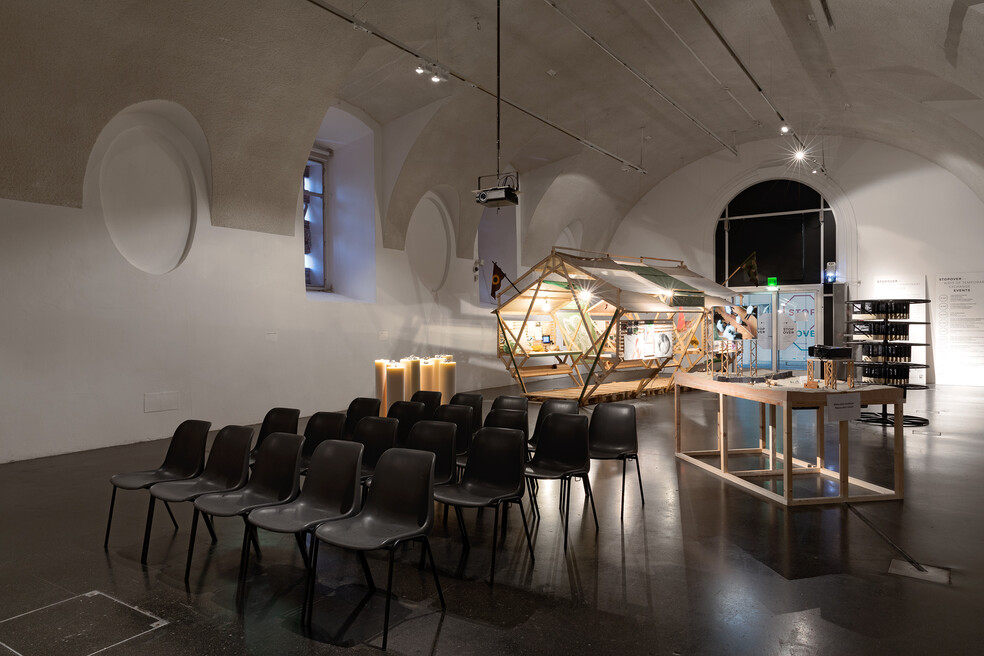