History and development of the MQ courtyard furniture 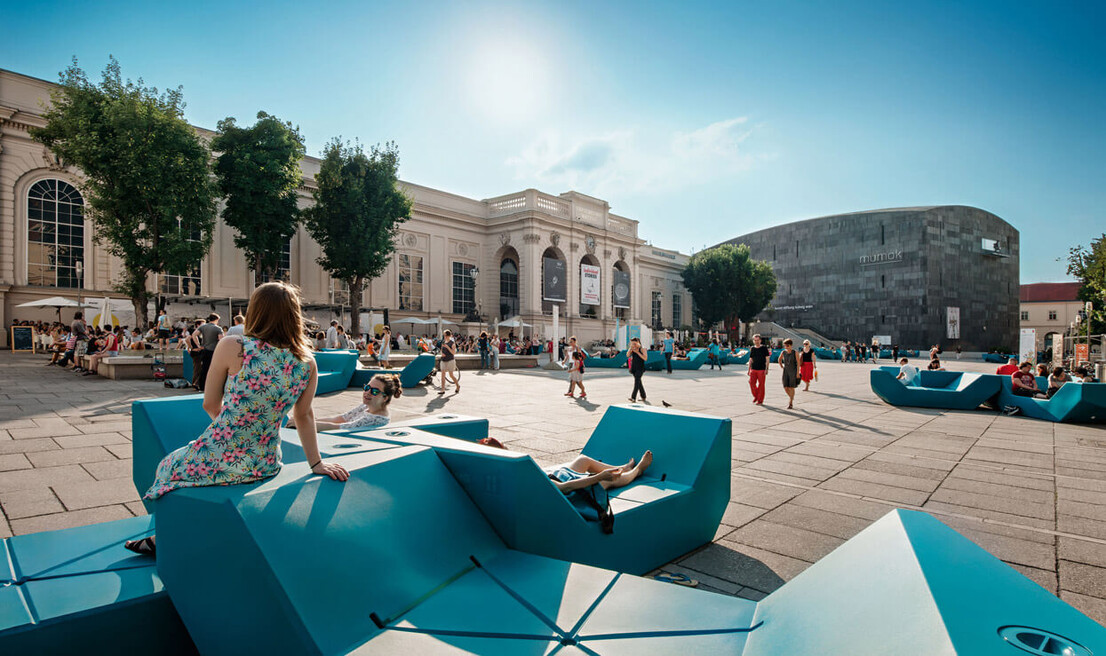 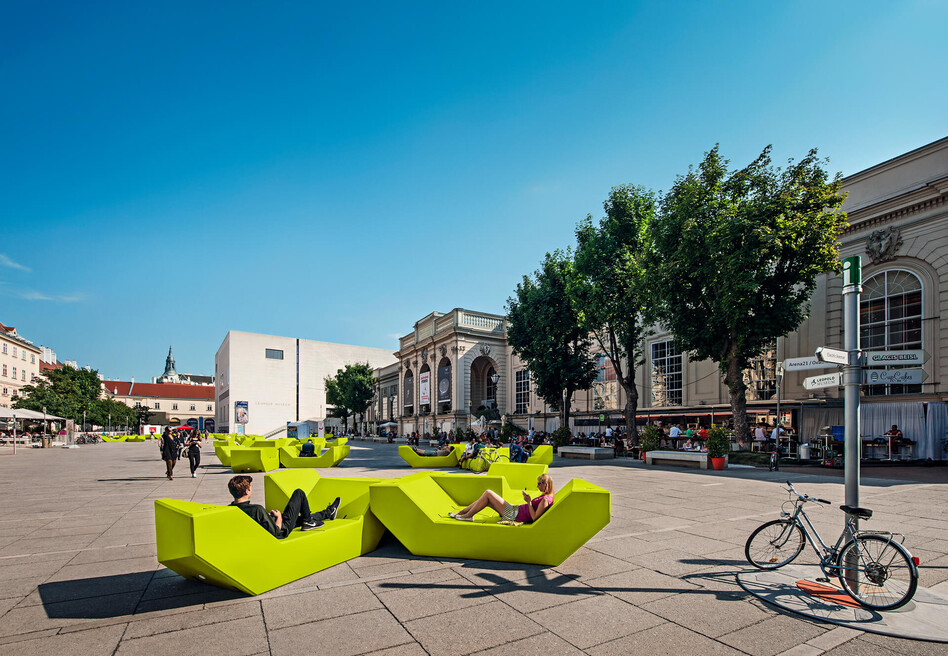 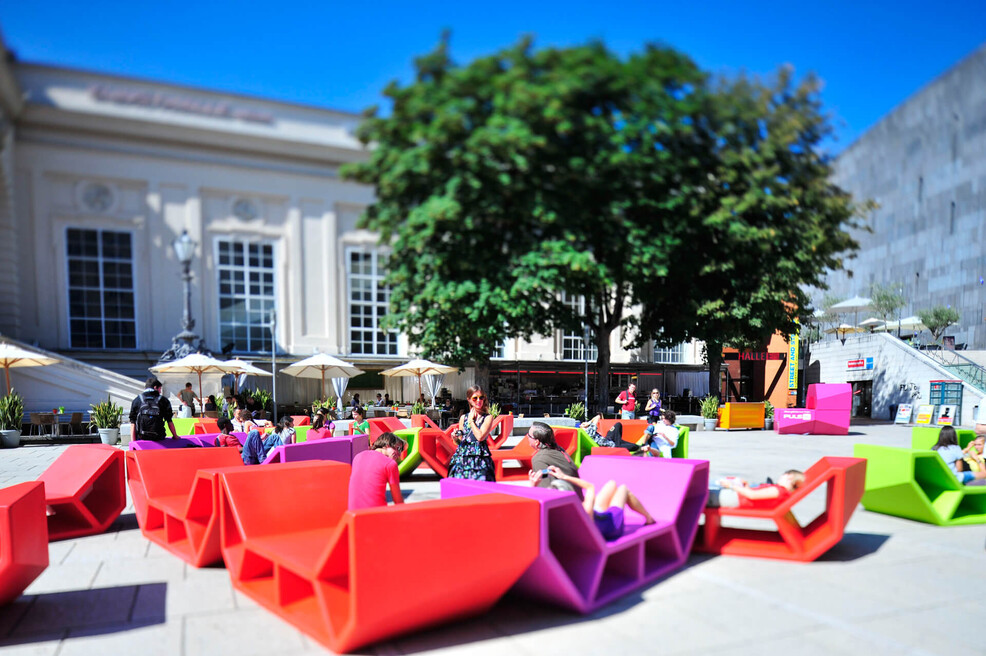 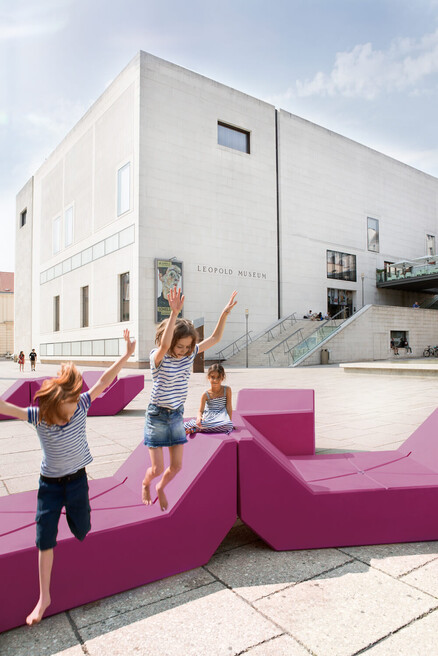 As a modern form of seating, the MQ courtyard furniture invites visitors to the MQ courtyards to relax and linger, making them a significant factor in creating the MQ “living space.” The MQ seat, also known as the “Enzi,” quickly turned the MuseumsQuartier into a favorite haunt of Vienna’s residents, as well as of tourists from around the world, and the MuseumsQuartier is now often referred to as the “city’s living room.”

It all began with an art project in 2002. After the MuseumsQuartier opened in June 2001, there was hardly any seating in the MQ courtyards except for a few wooden benches and no artistic use of the space either. As a result, the MuseumsQuartier Errichtungs- und Betriebsgesellschaft (MQ E+B) commissioned Austrian artist Josef Trattner to create an art installation for the site in the form of giant foam objects. They were immediately seized on by visitors and enthusiastically put to use as seating. Based on the enormous success of this project, the MQ E+B  invited several teams of architects to design versatile seating for the MQ courtyards. The idea put forward by the architects PPAG – Anna Popelka and Georg Poduschka – was chosen and the MQ courtyard furniture made its first appearance in the MuseumsQuartier in winter 2002, assembled as igloos as part of the “Winter im MQ” program series. In 2003 the seating was put out for the first time in summer and was an immediate hit with visitors, who used it for relaxing on and spending time with friends. Since then it has become impossible to imagine the MuseumsQuartier without it.

In terms of design, the seating now comes in different models. In contrast to the original “Enzi,” the “Enzo” is hollow and a completely different manufacturing process makes it more robust and more resistant to damage. Yet the seating’s external contours and size have remained the same. Summer 2013 saw the MQ seating undergo a further redesign. The new generation of “Enzi” model builds on the design of the existing MQ courtyard furniture: the open reinforcing struts are gone and a hole in the center of the seat not only allows rainwater to drain, but ensures stability and provides support for a sunshade. It is a return to the original form of the “Enzi” but uses the robust material of the “Enzo.”

The MQ seating has now become something of a trademark and has been used by both “WienTourismus” and “Österreich Werbung” as a brand ambassador for Vienna. At the same time, the furniture is also utilized in art projects. During the Eurovision Song Contest (ESC), 40 pieces of the world famous MQ furniture were decorated by 40 Austrian artists. Each artist was allocated a country by drawing lots and took that country as the inspiration for their design. This joint project by the ORF and the MQ was curated by the Kunsthalle Wien, Leopold Museum and mumok, who were responsible for selecting the artists. It was also supported by Österreich Werbung and ÖBB Rail Tours.

As early as 2005, the courtyard furniture at the MuseumsQuartier Wien was awarded the Adolf Loos National Prize for Design and was the first winner of the new “Spatial Design” category. In 2007, the MQ seating gained its first nomination for a National Design Award in Germany.