"Fiction is my reality. Feminism is my redemption." 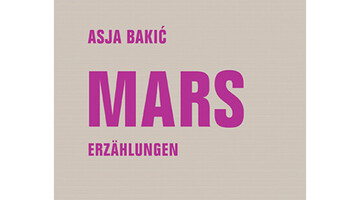 "Fiction is my reality. Feminism is my redemption."

In cooperation with the Austrian Federal Ministry for European and International Affairs (BMEIA), Asja Bakić spends November and December 2021 as Q21 Writer-in-Residence in the MuseumsQuartier Wien. Interviewed by Sabine Winkler for Vienna Art Week, she talks about her work.

Sabine Winkler: You write poetry and short stories, work as a translator, write the blog In the Realm of Melancholy (asjaba.com), and are one of the editors and writers of Muf (muf.com.hr), a website dedicated to feminist readings of pop culture. You have published two short story collections, Mars (2015) and Sweetlust (2020), and the book Come, I'll Sit on Your Face (2020), which is a collection of essays about pop culture.

Asja Bakić: Right, except Muf isn’t updated anymore. The collection of essays Come, I’ll Sit on Your Face is a selection of texts I wrote for the feminist website from 2014 to 2018. After that, I started writing film and book reviews for the weekly magazine Express. Right now, I’d say I’m both, a cultural critic and a writer. Translation doesn’t pay that much any more in Croatia, so I do it less these days.

In the short stories of Mars, the protagonists find themselves in upside-down worlds, most of which are dystopian in nature. The speculative scenarios embrace the unexpected and the uncertain, genre stereotypes and social norms are thrown overboard, everything seems unstable. Something like an element of resistance lies in the unpredictable, because it eludes control.
Do your protagonists operate in this space between resistance and threat?

They do, indeed, most of the time. I like female characters that thrive even in the most difficult scenarios. I deliberately put them in awkward, unpredictable situations, because that makes readers uncomfortable as well. Dystopia, for me, isn’t an imaginary place, it’s reality. I don’t want to pretend everything is okay. Not even for literature’s sake. And especially not for my own comfort.

The stories mix real and fictional settings and characters: forests and remote villages, bedrooms, a war zone, an in-between world where you go after death, and the titular distant planet are populated by zombies, doppelgangers, gods, seductresses, androids, and shady husbands. The relationship between the characters is defined by the distance that determines their behaviour or position. As far away as possible, like Mars.
What does physical, psychological and emotional distance mean to you?

Right now, everything! But I didn’t write the book during the pandemic, so I have to go back to pre-Covid times to give you an honest answer. I always say I’m good with languages, and really bad with people. Often I find myself passionately invested in books, in ideas, but people don’t excite me as much. Maybe I just don’t want to get hurt, who knows? Keeping distance isn’t always such a bad thing. If you have your own space, you can create more easily. We need distance to appreciate people more when we’re with them. Friends you don’t see every day you don’t take for granted. My characters are the same: they need to be alone to understand others and themselves better, to try and understand all the complexities of life. I don’t write about emotional distance though, because I’m too invested myself.

Mars is also about the process of writing itself; it deconstructs literary stereotypes. Writing seems to be the only remaining instrument for the protagonists that promises them some kind of stability or even comfort, but from one moment to the next it can become threatened by repression or a threat itself, destructive. For example, you take up the image of literature as a bridge between the living and the dead by allowing one of your protagonists to write her way back to life from the afterlife. At the same time, female writers are banished to a penal colony on Mars so that books can no longer do harm.
How do you experience the process of writing between redemption and catastrophe, reality and fiction?

Nicole Seifert recently published a great book called Frauen Literatur, a study about why we have literature on one side, and “weibliches Schreiben” on the other. As a female author I’ve always been on a precipice, just waiting to fall into a predetermined notion about what a woman should and shouldn’t write. It’s no wonder I’m obsessed with writing as a literary theme: writing is power. When men say “weibliches Schreiben”, they want to take my power away. So, I have to write about women writing. That’s my life. Fiction is my reality. Feminism is my redemption.

In Mars you combine elements from different genres such as horror, science fiction and fantasy with everyday impressions. In your blog, you write about pop culture from a feminist perspective. To what extent do your studies of pop cultural phenomena or aspects of reality inform your narratives?

An interesting thing happened when I started writing short stories: I wrote them as speculative fiction, although I never read anything but “high” literature. The only exception was comics. But I did watch a lot of science fiction and fantasy TV. One can never know what influences one’s own writing. I needed years to understand how important Isaac Bashevis Singer is to me, or Maryse Condé, or characters like Tintin and Sailor Moon. The brain is a wondrous thing, and I appreciate mine for helping me out. It put Goethe right where all the episodes of Star Trek: Next Generation were. And it worked! There’s no difference between popular and high culture. There’s only culture, and I love all of it.

In the contingency of speculative reality, do fact and fiction collide in a poetic or even destructive way? How does this alter literary texts? Does speculative writing offer a way not only to question references but also to dismantle stereotypes and norms?

Speculative fiction is great. Not only because it’s fun to read, but because it very often does what contemporary fiction avoids: it welcomes change. In real life as well as in literature. It changes our perspective, our set ways of thinking about mundane things, politics, sex and death. It makes us uncomfortable. I don’t care what others say, but you need fantasy to speculate about reality. I, for example, need the unknown to cope with the past. So yes, there’s collision, not between fact and fiction, but between these two tendencies in literature. Contemporary fiction sometimes thrives on stereotypes. It emotionally manipulates its readers with “true stories”, “real people”, “real struggles”, but it’s still just fiction. Speculative fiction, on the other hand, usually doesn’t pander to bourgeois sensibilities, so I understand why some people avoid it at all costs. It’s up to readers to challenge themselves with different books, even with something they think they’ll hate. Contingency is inevitable. You have to embrace it. Speculative fiction helps with that.

Asja Bakić will do a reading with Andrea Grill at the Literaturhaus Wien, 24.11.2021, 7 pm as part of the CROSSING BORDERS series.
CROSSING BORDERS brings international authors, who are invited by the Federal Ministry for European and International Affairs to be Writers-in-Residence at the Q21/MQ in Vienna, into dialogue with Austrian writers.