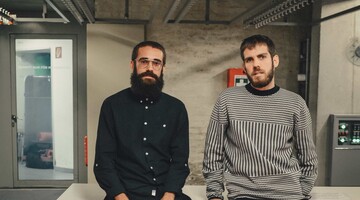 The artist duo Cooking Sections’ (Alon Schwabe and Daniel Fernández Pascual) full-hearted enthusiasm in the approach to their subjects is almost contagious. Collaborating since 2012, the duo creates geopolitical cooking installations and performances that explore “food territories”. In the process, they transcend disciplines, invent new methodologies and create bases for discussion. Based in London, they have been focusing their research on Britain’s imperial past and present, working on a project called “The Empire Remains”. Part of their research is now shown in the exhibition LEVITATE!, which made us want to sit down and talk with them at Dschungel Wien cafe.bar. Fortunately, the two artists have a lot to say and like a good chat.

You met at Goldsmiths University of London at the Centre for Research Architecture in the Visual Cultures Department. When and how did your collaboration as Cooking Sections start? Where does your interest in food performances come from?

Daniel (D): We have different backgrounds, but we had both been working with food before - in different ways, from performance to research on landscape.

Alon (A):…through cooking in the kitchen!

Daniel: – or amateur interest. But then we started collaborating on an independent project in Alaska with three other colleagues. There, we were already dealing with issues of food and subsistence. We looked at hunting patterns of nomadic societies above the Arctic Circle, in an Inupiaq community in Arctic Alaska, and from there I think it kept on evolving.

A: We started looking into how food and seasonality can be approached as very dynamic systems that have various entry and exit points. The Western part of the world or the so-called First World is used to look at seasons as something that comes and goes each year – in the way a calendar is defined, in a more or less fixed pattern. We associate specific food habits with each season. The experience in Alaska made us challenge those premises. From there, I think the work has evolved and still revolves around this idea. Like how can we consider these time frames we see as a very defined thing in relation to the current geographical, environmental and political challenges we are facing.
We have been working together for three years. I would say that our collaborative method is very dynamic. Daniel has a strong architectural background whereas I come more from performance art. Still the roles are not defined by our training or background. They are very dynamic and keep changing.

D: We are always inbetween disciplines. Some people say it’s visual art, or geography, and others say it’s anthropology, but I don’t know how to label it myself. To me it is more about methodology or the way of looking at things.

A: Last summer we did a project for the US pavilion at the Venice Architecture Biennale, now we are showing a piece at an exhibition for Q21 – it’s really kind of inbetween a million disciplines. But it doesn’t really matter. We just use the opportunity. Each of these things are an opportunity to develop our work, research and methodologies.

D: The idea behind Cooking Sections is not necessarily just about food or cooking. It is more about food as a tool to look at reality. It’s also a lot about food production and consumption and the way it affects space, from landscape to industry.

Why did Daria Khan approach you for participation in the LEVITATE exhibition?

D: Daria saw a show we were part of at the Delfina Foundation in London.

A: Two years ago we were in residence for a programme about the politics of food. She saw the exhibition and invited us to participate in the project. We really liked her approach and we find the entry point, the story of the Pentagon, incredible, and the list of participating artists and the works she chose were really great. This kind of started to make us think.

D: Then we started to look at this sinkhole phenomenon at the Dead Sea. These holes are formed because of the cavities in the underlying ground, and in a way this is connected to the idea of levitation. Because even if for Daria Khan the story of the Pentagon was the subject of levitation, to us, levitation was more about the potential of suspension, like floating above a cavern or falling into a hole.

A: Just to clarify what a sinkhole is: Sinkholes are a phenomenon that has – unfortunately – become quite common in the last thirty to forty years. It is linked to resource extraction and can be seen in California, Russia, Israel, Palestine, Kazakhstan, Turkmenistan... Various regions all over the world, really.
Around 20 years ago, over 4,000 sinkholes started to appear in the Dead Sea due to the fact that the salt layer underneath the earth has dissolved with the sea level dropping and fresh water coming down from the mountains. Because of the resulting cavities you have a collapse of the layer above it and you get a sinkhole. There are three major reasons for this happening in the Dead Sea area. One is the construction of dams and the whole infrastructure of water along the Jordan River Basin. These dams hold the water coming from the mountains into the Jordan.

D: The Jordan goes north to south from Syria through Lebanon, Jordan and Palestine to Israel.

So it affects all those countries together.

D:  Yes. But none of the countries are implementing a strategy – of course because of transnational issues and political struggle. So it is impossible to deal with the problem at a transnational level in the current situation.
There is not enough water reaching the Dead Sea, so the sea level is currently dropping one meter a year, which is a lot.

A: Then you have the Jordan River moving closer to the Dead Sea now, with over a million date palm trees planted in the Occupied Territories. Israel is using the Palestinian aquifers to water the dates. This is one of the hottest and driest places in the region, the temperatures during the summer months rise to over 40 degrees and every date tree has to be watered a 1,000 litres a day. And then we have evaporation. The entire southern part of the Dead Sea has been turned into evaporation ponds, absorbing water from the northern side. All that in order to extract the salt and potassium. Israel and Jordan together are part of the world’s biggest producers of potash fertilizer.

D: So on the one hand you have this need for fertilizers to increase the food production everywhere in the world, and on the other hand you are completely destroying an ecosystem. That’s the ethical dilemma to discuss and rethink.

So that was the phenomenon that inspired your work for the exhibition?

D: Daria [Khan] presented the idea of levitation to us and we thought this would be another approach. The shores of the Dead Sea are under imminent threat of collapse, they are risk areas because they are literally floating on top of holes – hence the title of the installation, “Under The Sea There Is A Hole”.

D: It is site-specific and we applied engineering materials which are used to make roads sort of levitate. For example, if there was a bus driving on the road and suddenly the earth collapsed, creating a hole, this structure of nets of geo-fabrics would hold the asphalt for the moment, until help arrives. So it’s kind of a patch, a small solution, because you cannot solve the problem without transnational cooperation. It’s just about preventing casualties.

A: The second part of “Under The Sea There Is A Hole” is the 25 tables. They are a map that portrays the 4,000 sinkholes which have been appearing along the shoreline of the Dead Sea. Basically, the tables are the platform for holding the dinner performances.

D: The dinner performances, which constitute the third part, will happen at the end of October and mid-November. The recipes we are inventing are again about how you deal with the landscape created by the sinkholes, but also about speculating about other ways of eating, which can question the necessity of fertilizers or approach water stress from a different perspective.

And also about dealing with how much space you actually have on the table.

D: The tables are intentionally uncomfortable!

A: Well, it’s not that they are intentionally uncomfortable but they just have 4,000 holes.

D: You are eating at a table full of holes and sometimes you may need to fight for some space to put your plates on, or you’ll have to balance the table, which is suspended from the ceiling.

Why did you choose to exhibit these works in Vienna?

A: For the past two years we have been working on a project called “The Empire Remains”, which looks at the remains of the British Empire and its transformation. We’ve been looking at the food infrastructure that was established by the British, and at the transformation from imperial to independent systems in the former colonies and dominions.

D: Anyway, it was not specific to Vienna, but specific to the idea of LEVITATE! Although at the same time, living close to Ringstraße is super interesting. Even the building we are in shows the idea of an empire. We’ve also learned that salt mining was an important trade in the Austro-Hungarian Empire. In a way, this is also a connection.

Are you trying to raise awareness for these phenomena only within this museum/art context?

D: The format or the venue are not the most important thing, we look at different issues that affect us – also as a larger “us”. They might materialize in one format or the other, in one place or another.

A: Next week we are going to Milan to participate in the international gathering of small growers.

A: Yes. We are going to have discussions with farmers and growers from all over the world, we are brought there to challenge and shake things up a bit. We think there is an urgent need to reconfigure space beyond market-driven scenarios controlled by "organic," "bio," or "local" labels.

D: Last year at the Biennale, we sat down with CEOs of corporate architecture offices. It’s this working inbetween disciplines that we enjoy a lot. Looking at landscapes and spaces from different perspectives is more important than labelling disciplines.
For this we need to invent new methodologies every time, that’s how you do things. Every time there is a new problem, we think it is worth to invent, discuss or test new methods – even if you fail many times.

Should artists be politicians?

A: The link between art and politics has become a very popular subject of discussion in the past five or ten years, but I think it is something that is relevant to architecture, to agriculture, to any form of practice.

D: You even see it in education. Many universities are rethinking their programmes, because today it doesn’t make so much sense to speak about disciplines like photography or sculpture. There’s this school that, instead of having fine arts like photography and architecture, provides topics, like “crisis” or “cement”. People come with different approaches and techniques to deal with the subject. I think this can certainly blur the19th century modernist understanding of those disciplines. People are blurring it more and more. 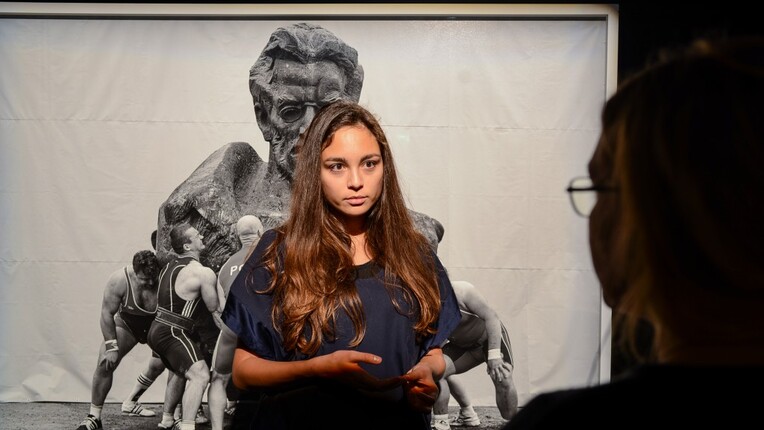 "A woman who levitates obviously levitates above her role." 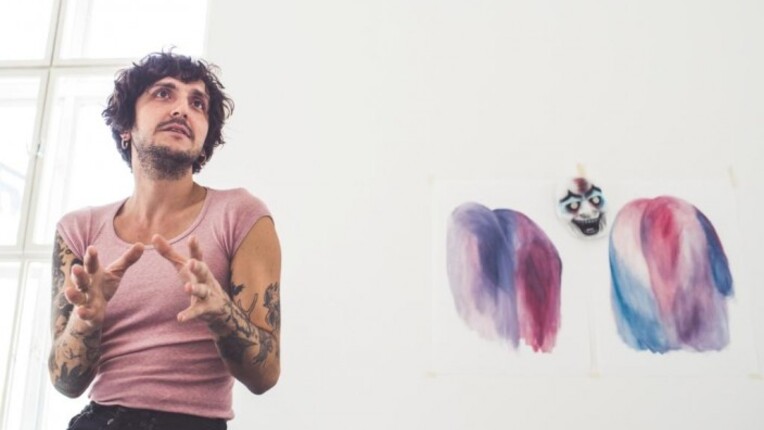 "Everybody can be the outsider."