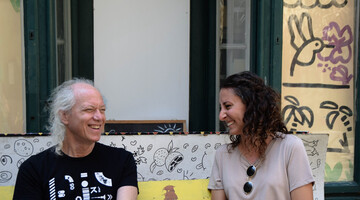 HV: You are an inventor. What is the best invention of all times?

There is another invention I really like. It’s an art piece that I think is an incredibly wonderful technology – it’s called the useless machine. It is one of these total whimsical things that the world could totally do without, except the world is better with them. The useless machine is a box and it’s got a switch. You turn the switch on, then the box opens and turns itself off again. That’s all it does. A great statement on technology.

HV: The way you express yourself is through tech-innovations. And you travel the world giving free workshops in hackerspaces. What defines a hackerspace?

MA: It’s a physical place, where people get together in a community to support each other and to do whatever the individual community members want to do. Usually, it has to do with techy stuff, but there is also an intersection with art. Because it’s not just tech for techs sake, it’s tech because people think it’s cool and they want to do something interesting with it. And quite often they make something that makes the hackerspace look cool. Like blinky lights or things that hang from the ceiling. They add sound to it, add moving parts or kinetic art. People doing software, people doing music, people doing art. People doing all sorts of things. It depends on the community.

When I started a hackerspace in San Francisco called Noisebridge, there were only a hand full of other hackerspaces in the world. Most of them were in Germany. But also one here in Vienna – called Meta Lab. They helped us start Noisebridge in San Francisco. It grew super fast and became super popular. It was wonderful. There are thousands of people now, all sharing their projects with each other and doing what they really love doing. These are supportive areas. You just walk to a hackerspace and be around cool people and learn.

HV: Name three things that should not be missing in a hackerspace.

MA: Community, to support and encourage each other. It also has to be a physical place. And of course, the context of making cool things.

HV: You gave a very inspiring TED TALK in Brussels, where you handed out keys to your hackerspace to the audience. Why is sharing besides teaching and learning such an important ingredient for success?

MA: You can’t learn without sharing. Everyone who teaches is of course sharing what they know - their skills, their knowledge, their experience. People who are learning are also sharing of themselves as well. Why are they learning it at all? Even if their parents tell them they must. They are sharing their time and their energy. That’s really important. We have shared since the beginning of people on the planet. That’s why we survive. We come together in a community and support each other. That’s sharing our support, our compassion.

HV: Can you tell us more about your motivation behind your continuous work on the ArduTouch?

MA: I’ve been making music synthesizers since I was a young teenager. I was always fascinated with that and I would make sound and music. I played piano since I was a little kid and I also listened to synthesizer record albums.

I loved switched-on Bach and Stockhausen. My interest in that kept increasing. My masters thesis was also a digital music synthesizer.

About five years ago I made the first ArduTouch music synthesizer kit. It’s very inexpensive and there is a video of me playing on 7 of them at once.

HV: You are the inventor of TV-B-Gone, a remote control whose only function is to turn off TVs in public. You called the device an environmental management device. What was your motivation behind it?

One time I was at a bad take-out place with some friends. We hadn’t seen each other in a while. A TV was just on in a corner and not only I but all of us were distracted by the TV and were looking at it. Why were we looking at the TV? We were there to pay attention to each other and catch up. But the TV made that difficult, no matter how many times I told myself, “Don’t look at the TV!” I kept looking at it, and so did everyone else. We talked about it and thought, wouldn’t it be great to just turn all those distractions off? I knew I could, so I invented it. It’s just a remote control that sends all of the TV OFF-codes. Then a friend said, it should be called TV-B-Gone.

HV: Does the creative environment of the MuseumsQuartier Wien help you to generate innovative ideas? And would you say, the Artist-in-Residence program of the Q21 is kind of a hackerspace itself, where people do what they love?

MA: Residencies are really important. They are not really hackerspaces but they are communities. I come here, and there’s already a community for me to learn from and to share with. I bring what I come with and share that with other people and they benefit from that and they do whatever they want with it. I learn from people here and then go elsewhere and can share that, as part of my experience. Monochrom is what brought me here, and they let me use their space. Also, Meta Lab is a place, I love to work. There are always several people there. At the Q21 residency I have time and space and other residents. And my studio is incredibly beautiful. All these resources are available but it’s up to each individual to make it all work.

There are thousands of people going from hackerspace to hackerspace doing workshops, meeting people, sharing. The thing with hackerspaces is, that everyone is welcome and it’s open to everyone. There is a lot of openness in this particular Artist-in-Residence program, too. And MQ is open 24/7, which is wonderful. But there is not a central place for people to just walk around and see what the artists are working on. You don’t see that until there is some kind of exhibition. Which is appropriate for a residency. But not so much for a hackerspace. There are similarities and differences. But the community aspect is really important to both and that’s why they are both so cool.

HV: On social media you wrote, that you’re curious what you’ll come up with during the residency. How is it going so far?

MA: My project for the Q21 residency is going to be using three of the ArduTouch music synthesisers. It’s for the Roboexotica Special Edition at Ars Electronica in Linz. So, it should be kind of a robot thing. It also will be related to lounges and cocktails. I figured; I should build a robot that plays bad lounge music songs. And it determines which lounge music song to play by using a webcam and computer vision software. The software is open source and super complex. I couldn’t write that software myself, but I can use it because the creators shared it. (And of course, everything I do is open source including ArduTouch.)

The robot will look at who’s in front of it and by the way you hold your arms or the color of your eyes, the directions where you are looking, it will determine which bad lounge music song to play. And it can also have a bad computer voice try to sing along with it. That’s my idea now, and I got all of the parts, but I haven’t put it all together yet. But it is coming together. I’m working in my studio at MQ and I’m working in Meta Lab.

HV: How much did you miss your cat Rozo while being here?

MA: (laughs) Incredibly. I wish I could have brought him here. But I understand why that can’t work out, when people are allergic to cats. He is with my neighbour, who lives with Rozo’s sister. She sends me videos and pictures every day.