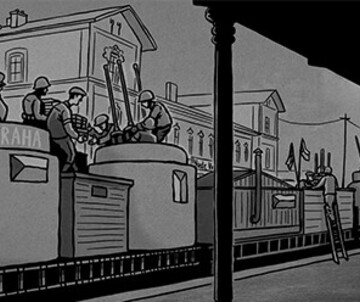 Playtest session!
From 6-7pm, the audience will have a chance to playtest an early version of “Svoboda 1945”.

Vít Šisler is the lead game designer of the award-winning video game “Attentat 1942”. In his talk, he will critically discuss the challenges and limitations of developing serious games on contemporary history. “Attentat 1942” is a narrative video game that tells the story of Nazi occupation of Czechoslovakia from the perspective of those who experienced it firsthand. When designing the game, its authors had to deal with various challenges stemming from the tensions between authenticity and fiction, realism and schematization, and narrative and procedure.
Furthermore, Vít Šisler will talk about their upcoming game “Svoboda 1945”, that deals with the contested memories of the World War II aftermath, namely the expulsion of Sudeten Germans, the rise of communism to power, and the collectivization of land.

Vít Šisler is the lead game designer of the award-winning video game “Attentat 1942”. He is also an Assistant Professor of New Media Studies at Charles University’s Faculty of Arts in Prague. His research addresses critical approaches to the intersection of culture and digital media; namely the internet, social media, video games, the networked public sphere, and online communities. Vit Sisler has published extensively on issues related to media, communications and digital culture. His work has appeared, for example, in New Media & Society; Information, Communication & Society; and Computers & Education. Vít Šisler has on numerous occasions spoken as a guest lecturer at leading US and European universities, including Stanford University, Georgetown University, University of Pennsylvania, and New York University. He is managing editor of CyberOrient, a peer-reviewed journal of the virtual Middle East published by the American Anthropological Association.