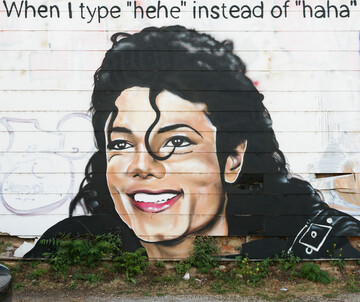 We are happy to have Australian graffiti artist Lush Sux here in Vienna during the month of July. He will put up as many walls as he can, one piece for #Streetartpassage as well as a body of work for the exhibition at Jan Arnold Gallery.

Lush Sux is an artist from Melbourne, Australia, widely recognized for his large murals on the streets, walls and other structures. His work has been repeatedly characterized as provocative, confrontational and comical; offering shameless commentary on topics as well as prominent figures that are trending at this very moment. The Aussie writer is polarizing due to the fact that his work elicits a reaction that you either will feel strongly about or despise completely. It’s this burgeoning divide between allies and adversaries of his work that continue to spur the media’s attention and bring cognizance to his name. It also comes as no surprise why the world’s most famous (and most reclusive) artist Banksy enlisted Lush Sux to be one of the participating artists for his ‘Dismaland, Bemusement Park‘ exhibition in 2015 in Weston Super Mare, England.

The Artist-in-Residence Program in cooperation with Q21 is part of the art complex MuseumsQuartier, Vienna.