DEDE & Nitzan Mintz - Out Of Place

DEDE & Nitzan Mintz - Out Of Place 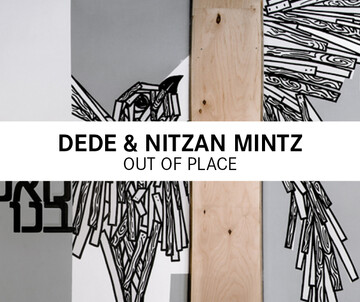 The Israeli artists Dede and Nitzan Mintz are invited for an exhibiton of their work which is at the intersection of the public space, outdoors and the studio walls, indoors. Dede is an Israeli artist who has been working in the public sphere since 2006. His works can be viewed at galleries, exhibition spaces, various art events and mostly in the streets of art capitals around the world, such as London, New York, Berlin and Tel Aviv.

Dede conducts his way as an urban tourist, wandering the ever-changing city streets and visually reacting to them. The urban landscape, together with the social and the personal questions it evokes are the main drives behind Dede's work. In his works, Dede examines and questions the man-made urban lifestyle people create for themselves, as he reflects on absurd, paradoxical human existence. His body of works concerns problems and mental phenomena shared by all the individuals of the urban society. He deals with loneliness, with the inability to align in the assembly line or to integrate in the group, and with the constant need to move forward to new territories, to run away to new places, both physical and mental ones.

Nitzan Mintz is an artist and a street-poet based in Tel Aviv. She graduated from The Department of Fine Art and the Department of Creative Writing at Minshar College, Tel Aviv, and from the Helicon School of Creative Writing, Tel Aviv. Mintz’s work is created in the public sphere, outdoors and between the studio walls, indoors. Her process integrates her poetic work and the material that contains it and their physical, actual location in the street. Her poems combine the personal with the political; they are written out of an internal urge to verbalize mental process which response to the outside world. The locations she chooses for her work within the urban landscape charges them with social
and political meanings.
Mintz has showcased her works in galleries, art spaces and events in Israel and abroad such as; Wilton’s Hall, London; NEUROTITAN Gallery; Berlin; Sweater Gallery, Yekaterinburg (Russia); Nahum Gutman Museum, Tel Aviv; Janco-Dada Museum, EinHod Artist Village; Ilana Gur Museum, Jaffa; and Fresh Paint Art Fair for Contemporary Art, Tel Aviv.<link http: www.nitzanmintz.com>